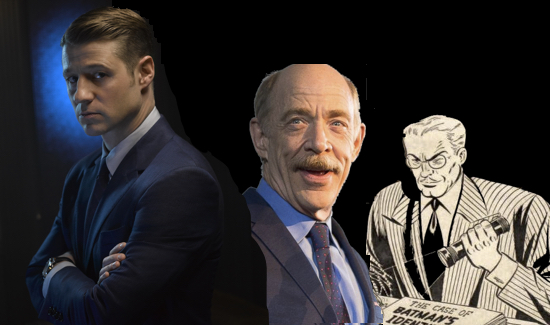 The new television season has begun. (Goody goody gumdrops?) With only two superhero shows displaying their wares, it’s a bit early to comment on innovations, trends and outrages, whatever causes to hurl an anvil at the screen or curl up next to it and purr.

Of the two returnees, Marvel’s Agents of SHIELD seems to be serving more of the same. It’s kind of interesting that some comic book stuff is being repeated in the electronic media. A complaint I used to hear about Marvel’s comics is that the storylines were difficult to follow, especially for newcomers. I have a similar complaint about SHIELD, but maybe I’m just dumb. Well, maybe, but if that’s true I’m not the only one. Last week I was talking comics with an Ivy League professor and this certifiably intelligent and erudite intellectual admitted that he, too, had trouble following SHIELD’s plots.

Not a problem with the other early returnee, Gotham. Though the stories are reasonably dense, there’s never any difficulty knowing who’s doing what to whom and why, and I remain firm in my belief that clear storytelling is a virtue. The show has given us a plot alteration, however: James Gordon, heretofore known as the straightest officer in town, has quit the force and is working as a bounty hunter which, as far as I’m concerned, is the same thing as a private eye.

Gordon has done some impressive evolving since he first appeared 77 years ago in Detective Comics #27, He began as a softish, elderly functionary who was never seen doing any hands-on law enforcing; he had Batman for that. He was a bit of a blank slate, our Jim, with no private life, hobbies, quirks, just duties to perform, which he did perfunctorily. Not an impressive dude.

But, like flesh-and-blood people, he changed. Got himself a wife and kid (though not in the television version). Became somewhat bitter – for a cop in Gotham City, that was natural – and maybe got chummy with people he should have avoided. He has just acquired a new girlfriend but, uh oh, his ex is back in town and is probably heading his way and that can’t be good. (But we’re happy to see Lee Tompkins again.) He’s still a credit to his kind, but he’s no longer a Goody-Two Shoes; if the rules need breaking, he breaks them.

Gordon is, in short, the kind of hero who began to be popular after World War I. He knows that the system is broken and that no authority figure should be trusted, including police. So he lives by a personal code and brings justice to places even good cops might not care to reach. He’s brave and tough. Though he’s basically a loner, he often has a sidekick and here, too, TV’s Gordon fits the archetype; Sergeant Bullock, who was a slob in the comics, is a groomed and decent man who has Gordon’s back.

I wonder if there’s a John Watson somewhere in Bullock’s family tree.

(Editor’s Note: We included the shot of J K Simmons in the art because he’s the next guy to play the role of Commissioner Gordon – in the upcoming Justice League movie – and because the editor likes J K Simmons and it’s his computer.)