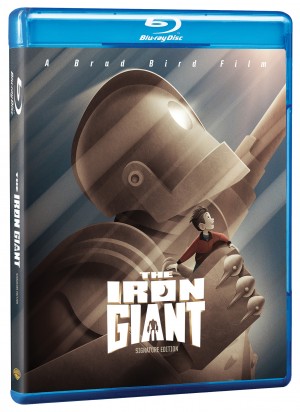 It used to be, movies surprised us when we took our seats. We didn’t have so many sources for news and trailers a decade or so back. On Tuesdays, Warner Bros screened new films after hours and one night, the DC Comics crew filed in to see an animated feature called The Iron Giant. We didn’t know much about it or Brad Bird, the man behind it.

We were utterly charmed. None of us knew Ted Hughes’ The Iron Man book it was based on but found the 1950s setting perfect, and the old style animation well-done. Best, it had heart and soul and humor and a robot who wants to be Superman. What’s not to love?

Warner moved the release date so late in the process that tie-ins missed the opening and the marketing wasn’t what it should have been. As a result, this modern day classic withered and vanished. Bird, of course, went on to make The Incredibles for Pixar and then direct a Mission: Impossible film so he did pretty well.

The Iron Giant, though, faded from memory. That is until 2014 when Bird and Warner agreed to spruce it up and rerelease it. With fresh cash, they went on to complete scenes that couldn’t be done for budgetary reasons and the revised film came out in 2015. Finally, the original version and Signature Edition of the film have made their Blu-ray debut in a nice edition from Warner Home Entertainment.

Bird and screenwriter Tim McCanlies made this a thoroughly American film, shifting the time to the post-Sputnik period of the Cold War and dealing with America’s paranoia. When something crashes in Rockwell, Maine (get it?) and people think they’ve seen a monster, a jaded government agent, Kent Manley (Christopher McDonald), comes to investigate. The something turns out to be an alien construction, a war machine that is human in shape and has suffered system failures. While he self-repairs, he (Vin Diesel) is learning from Hogarth (Eli Marienthal), the young boy who discovered him. He’s lonely since his single mother Annie (Jennifer Aniston) works too many hours at the local diner and he’s filled with the era’s pop culture – alien invaders and super-heroes.

imparts are subtly contrasted with the single-minded fear of the unknown represented by Manley, who grows increasingly unhinged as events unfold. The only ally Hogarth has is the town beatnik Dean McCoppin (Harry Connick Jr.), who runs the scrap yard and makes art with the junk.

There is gentle humor and some thrills and yes, parts can be predictable but overall, it has a gentle way about it that too few modern animated films possess. It has an old fashioned feel, with pacing that lets events unfurl without rushing or smash cuts to jar the senses.

The high def transfers are sharp and clear, the colors popping as they should. The two films co-exist on a single disc. There are two new scenes added to the original: Dean and Annie have a conversation in the diner and the Iron Giant has flashbacks to his life as a soldier in a mechanized army. Additionally, an ad for Maypo was replaced with what Bird originally wanted, one for Tomorrowland (working for the Mouse helps get you clearances). The lossless DTS-HD MA audio is a fine match and makes for fine viewing.

The majority of the special features from the 2004 DVD have been included here (well worth a look) along with The Giant’s Dream (55:47), which covers Bird’s career and how he wound up making The Iron Giant. It’s important to watch to better understand the filmmaking process along with the dues one must pay before being given a chance at something so personal. The Warner marketing errors are also included in conversation, which is rare honesty.  There’s also a Commentary with Bird, Head of Animation Tony Fucile, Story Department Head Jeff Lynch and Animation Supervisor Steven Markowski, which was previously used on the 2004 “Special Edition” DVD.  New, though, are fresh comments from Bird on the Signature Edition during the new sequences.