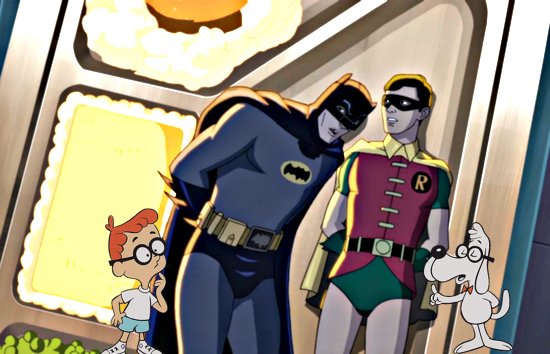 Bear with me once again as we step into the “borrowed” WABAC machine to visit another era – one fraught with its own cultural peccadillos, its own world-view, and its own sensibilities.

You’ve probably heard that WB is extending their never-ending line of direct-to-disc DC-based animated features this fall to include a new, original, and undoubtedly awesome story set in the world of the 1966 Batman teevee show. In order to do this effectively they needed to procure the services of the sadly few surviving series stars, so they wisely put Adam West, Burt Ward, and Julie Newmar in a recording studio to belt out their performances as Batman, Robin and Catwoman-the-first, respectively.

None found this a new experience. West has been voicing all sorts of stuff – most notably, Family Guy, although he returned to Gotham City in several of the subsequent animated Batman teevee series. Ward voiced Robin in numerous animated shows, and Newmar voiced Catwoman in the Arkham Asylum video game. She also played Martha Wayne to Adam West’s Thomas Wayne in The Brave and The Bold. And good for them; I’m glad they’re still around and still working.

But, wait. Let’s take that stolen borrowed WABAC and zot on down to January 12, 1966, the day the original live-action Batman series debuted. ABC promoted it heavily, stoking up the crowds to a fevered pitch with shots of sundry stars in action and of the greatest teevee car ever built. “People” were awaiting that debut with great curiosity while “comics fans” were looking for entertainment and validation. Many comics fans at the time felt they received neither.

The show was a joke. A sitcom in the classic “Hi Honey I’m Home” sense of the term. I enjoyed it, although my friends did not. I was a big fan of comedian/actor Frank Gorshin, and he was brilliant as The Riddler. I also enjoyed Burgess Meredith as The Penguin, both Newmar and Eartha Kitt as Catwoman, and Victor Buono as absolutely everything he ever did anywhere. And the show was funny – unfortunately, before too long we had seen everything they could offer and Batman the Phenomenon grew boring.

But not before the mid-summer debut of the wonderful movie version, which offered us all four main villains and a slew of fabulous toys (to quote a Joker of another mother) and a decent story, written by the teevee show’s developer, Lorenzo Semple Jr. Remember that name. 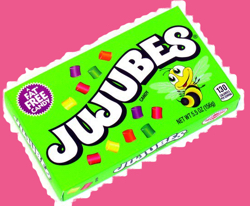 I think the reason why so many of my fellow comics fans of the time disliked – well, make that hated – the teevee series was because it was too close to the comic books. Not the Julie Schwartz-edited books of the time, but the Jack Schiff run that preceded it. Julie took over in 1964, around the time the teevee show started pre-production. Still, Julie did heroic work in restoring Batman to its historical glory, and this new… sitcom… seemed to undermine that effort.

Case in point: Around 1980 I was editing a magazine called Video Action and I pulled from my mini-horde of comics friends to write for the magazine. Marv Wolfman, he of enormous and well-earned comics fame, reviewed the movie Flash Gordon – a decent adaptation of the classic comics strip, except for the actors who played the male and female leads (yeah, that’s a problem). Marv started out with a condemnation of the movie’s writer, the aforementioned Lorenzo Semple Jr., as the man who ruined Batman. To be fair, Marv handled all that with his usual laser-like wit and affable charm, but he made it clear that he didn’t want to be invited to any dinner parties that Semple might attend.

That was then, and this is now (and so is the next moment; but I digress). Baby boomers love to talk about how great rock and roll was back “in our day,” but a lot of the most popular stuff heard on the radio sucked and we-all condemned it. But as both we and the music aged, we’d hear those tunes on the car radio and we’d find ourselves singing along.

I think, so it is with Batman 1966. It’s part of our childhood, our kids think it kinda ridicules our childhood and they like that, and it’s a hell of a lot easier to see the intended humor in the series when you contrast that approach with the almost psychopathic Batman we’ve seen over the past two decades. As an unintentional parody of these more “serious” times, the 1966 show can be kind of fun.

Batman: Return of the Caped Crusaders is due to be released on home video in mid-October and I’ll probably see it. It won’t get the same reception that the 1966 theatrical received when I went to see it at a Saturday matinee filled with 11 year olds, but that’s because it’s less likely that the younger movie-watchers will be hurling lethal Jujubes at one another.

But, of course, I’m not speaking for Marv here. To the best of my knowledge, Batman: Return of the Caped Crusaders is not based upon a script by Lorenzo Semple Jr.