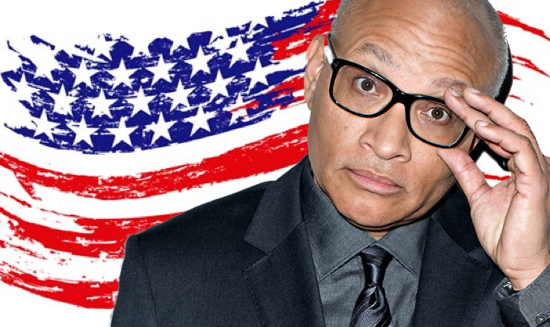 Yesterday was the last episode of The Nightly Show with Larry Wilmore.

(Note: As I write this, there are still three more shows. I’m going to assume that, if something newsworthy happens on-air between my deadline and publication, my editor will let me revise this accordingly.)

The Nightly Show replaced The Colbert Report, Stephen Colbert’s Comedy Central show a few months, before Trevor Noah took over The Daily Show from Jon Stewart. Both Wilmore and Noah had been featured correspondents on The Daily Show, as had Colbert a decade earlier.

I love Jon Stewart. He is the man my mother wanted me to marry (even if he’s a decade younger than I am). I also love Stephen Colbert. He’s really, really smart and he can sing. I was sad when they were no longer hosting their own fake-news shows.

It was gutsy of Comedy Central to give their most successful hour to two relative unknowns, both men of color. If you don’t believe me, look at who else hosts television news shows, fake and otherwise. You’ll be blinded by the white.

I like Trevor Noah. Because he’s not an American, his perspective is very different from what I’m used to hearing. He’s not even European. From South Africa, Noah’s point of view, his entire frame of reference, is completely alien to me (although I took two semesters of African history in college, I’ve forgotten almost all of it). Therefore, when I hear him tell a joke about American politics, the surprise I feel from the way he sees it adds to my laughter. There were weeks when he didn’t have a single white person as an interview guest, and no one said anything about it.

The show has problems, of course. Noah’s interview skills could be better. I’m sorry that Jessica Williams left, even though she’s going to have her own show and make more money. Mostly, because they inherited The Daily Show format, it’s taking them too long to find their own rhythm.

I love Larry Wilmore much much more. He’s really sharp and smart. He’s nerdy enough to know super-heroes and science. Watching the show, I want to know if he would consider dating an old Jewish woman.

His contributors (especially Francesca Ramsey and Mike Yard) took a while to grow on me, but now I love them.

Some critics have said that the panel portion of the show (when a guest star and two contributors sit with Larry and discuss The Issues Of The Day) never gelled for them. I like it. Sure, it often features rappers I never heard of before, and I want to interrupt and give my opinion (extra difficult since I usually record it and watch the next day). That’s okay. That’s how conversations work. Watching the panels, I feel like I’m having conversations with people I don’t know, on their own terms.

My favorite parts are not funny, but revelatory. For example, Larry Wilmore complains about Bill Cosby a lot (he still hasn’t forgotten, as he often reminds us), but what he’s mostly enraged about is that fact that nobody believed he was a rapist until a man http://hannibalburess.com said something about it. I’m not one of the dozens of women violated by Cosby, but I felt validated when Wilmore said that.

Comedy Central said that The Nightly Show never got the ratings it needed. The Daily Show is also doing less well than it was before Jon Stewart left. Is this racism? Are millennials (the target audience) more resistant to getting their fake news from black people than we thought?

I don’t have the statistics to demonstrate whether this is true or false. I just have sadness that there is no more.

In the meantime, black-ish, for which Wilmore is executive producer, remains hilarious.