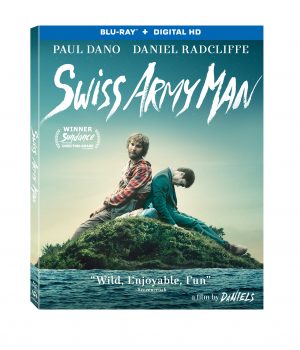 Hank (Paul Dano) is stranded on a deserted island, having given up all hope of ever making it home again.  But one day everything changes when a corpse named Manny (Daniel Radcliffe) washes up onshore. The two become fast friends, and ultimately go on an epic adventure that will bring Hank back to the woman of his dreams.

The Swiss Army Man home entertainment release includes a music-less audio track along with Q&A with the filmmakers, two behind-the-scenes featurettes, audio commentary with DANIELS and crew and deleted scenes. The Blu-ray Disc of Swiss Army Man will feature a Dolby Atmos® soundtrack remixed specifically for the home theater environment to place and move audio anywhere in the room, including overhead. Swiss Army Man will be available on Blu-ray (plus Digital HD) for $24.99 and DVD (plus Digital) for $19.98.