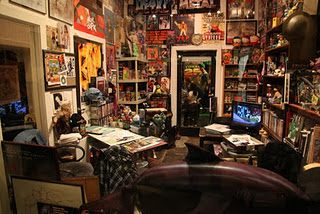 Now this is the way to spend your Christmas loot!

Teenage Mutant Ninja Turtles co-creator Kevin Eastman has moved his entire studio into Meltdown Comics… and he’s gonna auction the entire thing off in one giant lot to benefit the Hero Initiative.

The KEVIN EASTMAN ART STUDIO auction will run for 10 days beginning Dec. 25th, Christmas Day, at 9:00 PM (PST). It will wrap the evening of January 4th at 9:00 PM, which will be the final night of the 35 DAYS OF KEVIN EASTMAN event at Meltdown Comics in Hollywood. Swing by for the huge blowout closing night party!

And before you do, check out this video in which Kevin walks you through the studio and some of the items.

On Christmas night, you can seek out eBay merchant: oranj And here are some of the highlights you’ll find contained within this treasure trove!