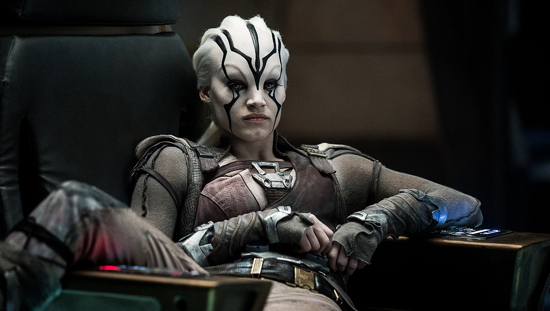 Kirk: We make a good team

Bones: We could be mauled to death by an interstellar monster!

Considering today is Monday the 25th and Star Trek: Beyond came out only three days ago, how much can I tell you about it without doing the dreaded HERE THERE BE SPOILERS dance? Hmmm…let’s see….

Well, that’s hard to say. If you had asked me that last night as I was walking out of the theatre, I would have said, “No, I didn’t luvvvvvvvv it.”

Meaning that I didn’t want to turn around and immediately buy another ticket, ‘cause I’m too honest to just stay in my seat and wait for the next show, and besides, with my luck, I would have gotten caught by that one guy or gal in the whole wide world who has the thankless job of cleaning up after all us movie slobs between showings and who takes his or her job seriously enough to throw me out or hand me over to the theater manager. The way I wanted to do when I first saw Raiders of the Lost Ark or the original Star Wars or The Empire Strikes Back or, come to think about it, the first J.J. Abrams Star Trek reboot back in 2009.

However, as I was talking about the movie while playing and cavorting in the pool this afternoon with grandson Meyer, daughter Alix, and son-in-law Jeff, I realized that while I didn’t luvvvvvvvv this third entry of the rebooted Trek universe, I definitely do want to see it again, because:

1) Chris Pine is simply becoming more and more handsome. In fact, before sitting down to write this I watched the Wonder Woman trailer – the one unveiled at this year’s San Diego Comic Con – just to feast my eyes on those amazing blue eyes.

Ahem No, not really. Let me try that again.

1) Chris Pine is inhabiting the character of James Tiberius Kirk more thoroughly with each film, allowing us to follow and appreciate the growing maturity of the young(est) captain who sits in the command chair of the Federation’s premier starship, all while never losing the charm of the boy inside;

2) Zachary Quinto and Karl Urban, as Spock and Leonard “Bones” McCoy respectively, still frankly fucking amaze me with their dead-on interpretations of the First Officer and the Chief Medical Officer of the starship Enterprise as we knew and loved them in the “before” time. It’s not only in their acting skills that totally get the quirks and mannerisms of the Vulcan-Terran hybrid and the “old country doctor,” but also in their spoken intonations and, yes, the very sound and timbre of their voices. How do they do that?

3) Speaking of the Euclidian – or is that Isosceles? – triangle that is Kirk, Spock, and McCoy…it’s all there. The wrangling, the bemusement, the annoyance, the loyalty, the friendship.

4) And with regards to that triangle… two sides, Spock and McCoy, are more cantankerously and crabbily thrown together than ever before, giving us the chance to revel in their ornery, and yet loving relationship.

5) Yes! Finally! Hurray!!!! The women of Star Trek get their due!!!!! Communications Officer Lt. Nyota Uhura (Zoe Saldana) has more screen time than ever, and she kicks ass, not only physically but also emotionally and with smarts. Not to mention Melissa Roxburgh as Ensign Syl. Yeah, she may be a “red shirt,” but she’s not simply disposable. And then there is Sofia Boutella as Jaylah, the woman who becomes the crew’s ally. Yeah, she kicks ass, too. But here’s a word that I haven’t seen in any of the media review. She’s adorable. As in, I adored her relationship with “Montgomery Scotty,” which lead me to…

6) Simon Pegg, as the Chief Engineer, is once again simply wonderful. (And by the way, he co-wrote the Star Trek: Beyond with his writing partner, Doug Jung, ably Robert Orci, Patrick McKay, and John D. Payne.)

7) Although I do have to say that John Cho, as Lieutenant Hikaru Sulu, does get a bit shortchanged this time around, in what I thought was a great addition to the character (not to mention to the franchise), it’s established that not only is Sulu gay but that he and his beloved are parents to a little girl. I also think it’s an absolutely wonderful tribute to George Takei, who has been in the forefront of gay rights since he first came out; Mr. Takei was one of the first to marry his partner when California finally voted in the legality of same-sex marriage. The funny thing is, Mr. Takei objected to this “change” in Sulu’s character. That seems odd to me…

As for the reasons I didn’t luvvvvvvvv STB, well it comes down to…

No. Not the actor. He was, as usual, pretty damn fantastic, especially – nope, not gonna go there. Not going to get all SPOILERY.

In fact, I can’t really get into why Mr. Elba, or, rather, and more specifically, his character, bothered me without getting all SPOILERY.

So I’m just going to have to drop it for now, until (I assume) Art Tebbel and/or Vinnie Bartilucci or someone here at ComicMix gives a more, uh, thorough review.

Until then, live long and prosper.

One thing I did truly luvvvvvvvv, immediately luvvvvvvvved: The honor and respect and love given to Leonard Nimoy, both within the movie itself and in the credits. And the saddest thing about Star Trek: Beyond is the passing of Anton Yelchin. Stay for the credits. You’ll see what I mean, and you’ll “hate” it, too.

Alexander Courage’s theme gets me every time!