Did the UK Mirror just post the most ridiculous Doctor Who rumor ever?

Let me tell you about how you generate clickbait. You start off by making the story about either a celebrity, TV show, or popular topic that will attract people’s attention. Then you string together enough facts and quotes vaguely connected to the idea that you can make the article more than three paragraphs long. THEN, (and this one is key) you make the headline a question.  So you’re not saying “This is a fact”, or even the increasingly popular “Sources report this as a fact”, but merely “Could this possibly be a fact?” Because then in the story, you can say that it’s probably just flummery.

To summarize: if a news report, especially one on the electric type Internet, has a question as the headline, the answer to said question is almost certainly… 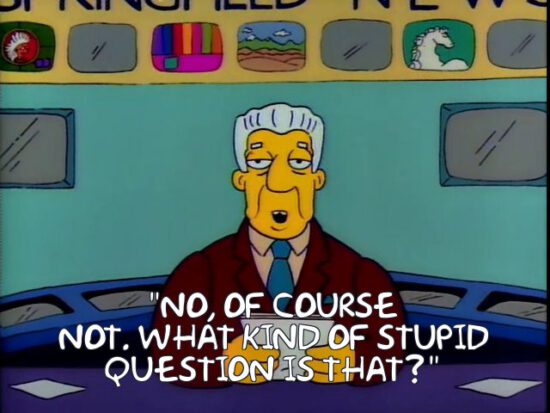 I’m going to get a lot of use of this graphic, I can tell you. (Thanks to Frinkiac)

So when I tell you that the Mirror Online posted an article titled “ Can Matt Smith be the first Doctor Who to regenerate as himself?“, can you guess where I stand on the question?

In the article, they reference several quotes from Matt Smith where he says he’s sometimes sorry he left the show, and hopes to come back to it some day, and one from Moffat where he says he misses his collaborator.

Add in the rumor that Capaldi is touted to leave at the end of the next season (ANOTHER story with no basis in fact, mind) and somehow, that means Matt is coming back.

This is another example of nobody being willing to say “No” to a story, because that ends the buzz.  As soon as someone denies something categorically, that’s the end of them being on everyone’s lips.  So when Joe Thespian gets rumored for a role in a Marvel film, he doesn’t say “that’s not true, there’s been to talks at all”, he says “Well, I can’t say anything more definitive about it, but it’d certainly be nice.”

OK, yes, they dropped the idea in the 50th anniversary episode, with the appearance of “The Curator” that the Doctor might someday “re-visit” his past incarnations in the future.

Yes, we’ve seen past Doctors return to the show, but as “themselves”, not somehow returning to their past forms in the current timeline. And yes, the idea of a regeneration into a past form is a tantalizing idea for a story.

But there is one, VERY important thing to remember.

If there is one thing that is nearly universally named as the show’s perfect idea, it is the idea that Regeneration is the most innovative concept ever. It allows the show to renew itself every few years, more than simply a change in producers or show-runners ever could.  By putting a new lead actor (yes, or actress, let’s not get distracted here) in the title role (look at me, I’m so incensed I’ve even passed up a chance to use the word “titular”) it give the show a chance to become something utterly new. Don’t care for the current guy? No worries, there’ll be another one along in a few years, come back and check him out.

Circling back to a past actor, in any permanent fashion, would be the ultimate admission that the show has run out of ideas. People get upset when the Daleks or Cybermen come back again, imagine the reaction if they rolled the clock back to an old Doctor.

It’s why the Big Finish audio plays are such a hit.  Want more Peter Davison as the Doctor? Here’s dozens of them.  We’ve seen Paul McGann, David Tennant, and even Tom Baker return.  Matt will almost certain do some. There’s your “more Matt” stories.

But on the TV show? In any permanent way? No.

Dammit, you you’ve got me thinking about it…

(Writer’s note – the headline of this article was originally submitted as “UK Mirror floats Doctor Who rumor so stupid I’m not even putting it in the headline, clicks-through or no”)
Share