So as I was saying before I was so rudely interrupted by fellow columnist Emily S. Whitten calls “Convention Crud” and I called, last week, “Airplane Adenovirus”… 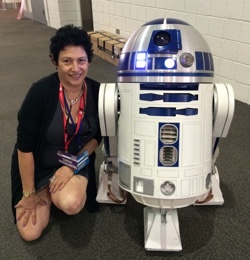 That’s “Absolutely Fabulous” for those of you too young to remember the BBC show.

Overseen by the Denver-based Pop Culture Classroom, a non-profit organization whose aim is to use comics and other pop culture media to educate kids and inform the public, the con is held annually at the Colorado Convention Center, an edifice that puts the Jacob Javits Center here in New York to total shame, in downtown Denver. Incredibly yuuuge – it stretches over four city blocks – with many atriums letting in the sunlight of the Mile High City, the con never felt crowded, despite its 100,000+ attendance.

I was invited because of my connection to Wonder Woman, who was created by William Moulton Marston 75 years ago this year. I must admit to having some trepidation, because, to be completely honest, I didn’t think that my work on the Amazon Princess was remembered, and I had images of sitting alone and ignored for three days. To make it worse, I hadn’t thought to bring any samples of my work to put out on display, so my table was white and bare in comparison to my nearest neighbors, authors and artists whose work was exhibited in beautiful and multi-colored presentations.

(To be fair to myself, I actually have very little of my work here at home. Over the years I have given out 99% of my work to my daughter’s friends, to cousins and the children of friends for birthday, communion, and bar-or-bas mitzvah presents, and for Halloween treats.) 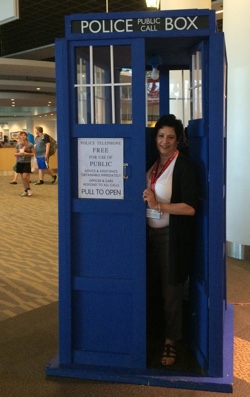 But those little fears disappeared immediately as I became entranced by everything at the convention. The first thing I saw when I entered the Exhibitors Hall was a “life-size” beat-up and dented X-Wing fighter, looking as if it had just returned from a rendezvous with the Imperial fleet. (I immediately took the above picture.) The next thing I saw were two Stormtroopers, and I handed my phone to the volunteer who was leading me to my table as I stepped between them; she obligingly snapped a photo.

I was, as my daughter had put it as she drove me to the airport, “with my people.”

I was on many panels, not all of them to do with “Women and Comics.” Pop Culture also features educational classes for kids and adults at the convention, and I was slated to lead “Creating a Four-Panel Comic,” which was for kids [I would say] from eight-years old and down. That experience is one of my most treasured memories!

When Alix was in elementary school I gave some “lectures” on creating a story for her English class, so I wasn’t at all nervous. I immediately involved the kids in the audience, not staying on the stage, but going into the audience and letting them talk into the microphone. The kids proved to be incredibly imaginative and involved. A young girl volunteered the superhero, named FlashDash for her super-speed. The villain was Lunchbox. This bad guy carries a lunchbox, and inside it are burritos. “Burritos?” I laughed along with audience, who were obviously enjoying themselves. “And what do the burritos do?”

“They explode,” said the young boy, who was about seven, and whose name I can’t remember, damn my menopausal memory!

“And when they explode, it smells like the worst fart ever! The smell will kill you!”

Well, I don’t know about you, but fart jokes crack me up. Just the mention of the word fart makes me go silly. So imagine the reaction of the audience and those within hearing distance – remember, me and the kids were using a microphone – when the young man said this. A gigantic Bwa-bwa-hah-hah! went up and echoed in Exhibitors Hall.

I didn’t want to embarrass the boy. “That is absolutely fantastic,” I said, still smiling and laughing a little. “Lunchbox uses the exploding burritos the way Hobgoblin uses his pumpkin bombs. That is so great.”

“So how does FlashDash defeat Lunchbos?” I asked. The creator of Lunchbox shot up his hand, and even though I really wanted to involve some other kids, everyone was looking at him, so I went with the flow. 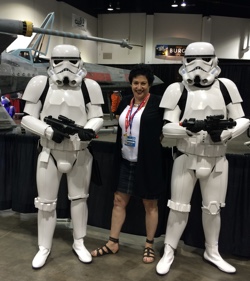 “FlashDash waves her cape super-fast and blows away the fart,” he said.

I’m tellin’ y’all, this kid is going to be a comics superstar in about 20 or 25 years, or even sooner!

Meanwhile, up on the podium, my artist, a really talented young guy named Colton, was drawing all of this out on an easel in four panels. We had three, so far.

“Okay,” I said, “So FlashDash, in the first panel, meets Lunchbox. The second panel shows Lunchbox throwing the burrito and it exploding.” Colton used wiggly lines to show the farts’s uh, “waves of stink.”

“The third panel has FlashDash waving her cape at super-speed, dispersing the fart cloud. So we have one more panel. What happens?”

A little girl, a very little girl, she must have been four years old, bashfully waved her hand, and I walked up to her. “FlashDash’s dragon uses his fire breath and burns up Lunchbox’s lunchbox,” she said softly. I’m telling y’all, this child was absolutely adorable.

“Oh, FlashDash has a pet dragon?” I asked her. She smiled shyly and nodded. I turned to Colton, who was already adding a little dragon hovering over FlashDash’s shoulder to the preceding panels. I said to the audience that this was an example of a writer and an artist “editing” their work, meaning changing it to make it better.

Then Colton drew the final panel, with the dragon’s fire breath melting the burrito-containing lunchbox. 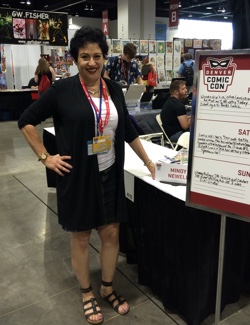 “And that’s the end of Lunchbox and his exploding fart burritos,” I said. “FlashDash and her pet dragon have saved the day.”

We weren’t able to photocopy the story, but many parents and kids came up to the podium and snapped photos of the “Four-Panel Comic.”

I met so many terrific people, I could fill this whole column with their names alone. I met that at the convention, I met them at the hotel. I met Jae Lee on the ride back to the airport.

I sat on panels and signed autographs and took pictures with fans. Oh, yeah, remember how I talked about my white, bare table? I found Mile High Comics, and bought a bunch of my comics, including issues of Wonder Woman (including what I consider mine and George Pérez’s best work on the title, #46, “Chalk Drawings”), “Lois Lane: When It Rains, God Is Crying,” and “Legionnaires Three.” (I then gave them as a gift to my Exhibitors Hall neighbor, the aforementioned Jeff Herndon, an amazing illustrator in the Denver area, and his wife in exchange for a beautiful painting of Gail Godot as Wonder Woman. I wanted to pay for it, but he and his wife wouldn’t hear of it, so instead we did the “barter.”)

Comics. Celebrities. An X-Wing, Stormtroopers, and R2-D2. The TARDIS.

It was a helluva’ weekend.