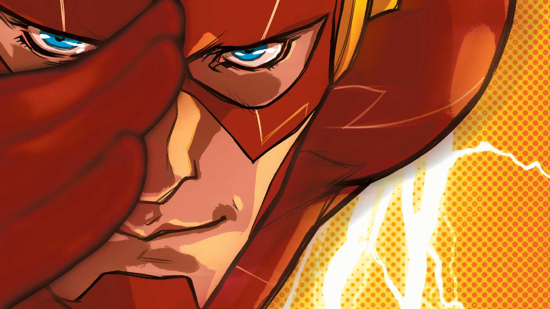 DC’s Rebirth brings with it a commitment to the tenents of the brand before things got overtly grim and gritty. No better examples crossed my desk this past week – opening up my now monthly shipped comic pack – than Titans and The Flash. Forgive me, I’m not actually sure if they are supposed to be preceded or followed by the Rebirth moniker… the shop keep explained it to me a week ago, and I honestly don’t even remember now. But no bother. Each issue was read and absorbed, and I’m here to finally say the words:

DC put out some great comics.

Titans directly follows the Rebirth one-shot reintroduction to the DCU from a few weeks back. As you’ll recall that’s where (SPOILER ALERT) we learned the Watchmen may be big baddies in this new version of the DCU, that there’s up to three Jokers running around, and the Nehru collar is slowly falling out of style. But most importantly: Wally West has returned from the void that swallowed him whole during the now-defunct New52.

For a first issue, Titans takes things aggressively slow. In antitheses to the norm of #1 issues, here we get basically just a single drawn-out scene. Wally has returned to Titans Tower – err – Apartment, to gather intel on his former team. Nightwing immediately springs forth from the dark to fight the would-be intruder. A few panels – and one big shock – later, Dick Grayson remembers his fast friend. Not long after that, a similarly paced intro-fight-shock-apology occurs with each of the remaining Titans (in this iteration we have Nightwing, Arsenal, Garth, Donna Troy, and Lilith). A couple of hugs and exposition about a potential big bad to hunt down, and the issue is donezo.

The Flash reintroduces Barry Allen to all, by way of a more rote version of his well-treaded backstory. Taking cues from the recent TV series, our definitive origin is now this: Barry witnessing the murder of his mom when he was 7, by Professor Zoom. His father is incarcerated for the murder, and Barry spends his days eventually exposing and incarcerating Zoom at Iron Heights. Barry is still CSI, under TV-guided Captain Singh. The issue pulls a bit of a wink and nod by starting us off at this familiar crime scene; a murdered mother, a father to blame, a child who watched it all. But this isn’t Barry Allen’s backstory. It’s present day, where he’s tending to a new case in Central City. And with his lab equipment churning away, Barry takes to the streets.

We’re caught up to the Rebirthening of Wally West, but this time from Barry’s perspective. After a similar explanation of the potential big bad, Barry splits from his protege to continue in his own way. He runs to the other top CSI in the DCU; Batman. From there, a quick reset of known facts (Comedian’s bloodied pin, visions of speedsters, mentions of time bandits…), a cliffhanger to chew on, and the issue ties itself up in a neat bow.

Beyond the snarky synopsis though, both of these books peel back the words of Geoff Johns not more than a few weeks back. As I’d snarked about previously, the DCU creative powerhaus incarnate took umbrage towards the cynical and cyclical nature of the brand he himself represented. He appealed to the baser instincts of the DCU: to celebrate heroism and optimism over real-world issues and the doldrum of continually modernized comic canon. At the time, I scoffed. In fact, if you go back and read my words, I vowed to continue to ban my enjoyment of their (and Marvel’s) books! But somehow, like a jilted ex, I couldn’t quit on comics. And while neither Titans or Flash were perfect… they were what was promised.

While we’re still very high above the week-to-week gestalt of what all DC is trying to prove with their Rebirth movement. But if the aforementioned issues are the spark to ignite the new wave of pulp, then I’m very much game for the future. Even with the imminent threat of further dragging down Alan Moore’s creation into the mire of pop-cannon or the threat of unknown Speed Force demons, it’s hard to finish either opening salvo and not walk away with a smile. Titans overtly celebrated friendship and the makeshift families we build for ourselves – through the lens of a formerly hokey after-school superhero club. Flash begins right where the New52 left us off – angry, depressed, embittered – before pivoting towards hope, rationality, and the teaming up of dissimilar heroes working towards a common goal.

Suffice to say I’m timidly optimistic myself. While he didn’t pen either issue, I feel as if I owe Mr. Johns a drink the next time we cross paths. Granted it won’t ever happen… but I’ll be damned if I don’t owe it to him anyways. The future is bright once again.

And that is a Flash Fact.