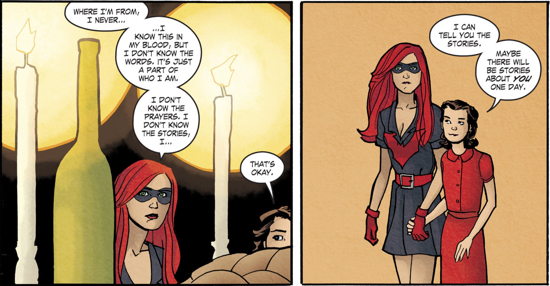 This column was assigned to me so that I might bring you, Constant Reader, some insight into popular culture and, if we’re both lucky, a few laughs. It’s not supposed to be a virtual therapist’s couch, wherein I share with you the tortured depths of my very soul.

Bear with me. This week, you might get both.

When I was young girl approaching puberty, my mother explained to me that no boys would like me if I was fat. In case I might forget this, she repeated it numerous times throughout my adolescence and beyond. She wasn’t being (deliberately) cruel; she was passing on the life lessons she learned from her own parents. Too bad her words had precisely the opposite effect.

In any case, I would probably obsess over my body and what it looks like no matter what my parents said. I’m a woman and I live in a modern Western society. My sense of self-worth has been trained to depend on how I fit into the standards of beauty presented to me on television, movies, and magazines. Including comics.

Now, I’m more or less an adult, and a feminist, and the rational part of my self-image does not depend on attention from men. It’s the less rational parts that continue to eat away at me, no matter how much I try to berate myself over this.

In the process, as a defense mechanism, I can get really judge-y.

This was brought home to me vividly in the new book, Shrill by Lindy West. I was not familiar with Ms. West, a writer for The Stranger and for Jezebel, but the excerpts of her work printed in the review I read were hilarious, so I bought it.

Ms. West is fat. She’s also loud and opinionated and has the unmitigated gall to expect to be able to live her life without a lot of anonymous advice from strangers. Which, apparently, fat women get all the time.

I confess that I have worried about fat friends for health reasons. West debunks this concern with rather specific evidence that fat people can be healthy, and she has her own blood-work to prove it. I think she may oversimplify that obesity isn’t a health issue as much as those who think it is. Some people need to lose weight for medical reasons because that’s the body they were randomly assigned by whatever cosmic entity stopped me from looking like Tilda Swinton.

Some people can’t spend time in the sun, but we don’t shame them for their fair skin.

It’s also really insulting to think that any woman in the world in which we live doesn’t know how much she weighs, what size clothing she wears, or which parts of her jiggle. We know. We also know that we have lives. We have shit to do. We are not here to be ornaments on your world-view. We don’t exist for your judgment.

Remember when I said this would relate to comic books? Here it comes!

My pal, boy-editor Mike Gold, sent me a DC Bombshells story about the super-heroines in the Warsaw Ghetto. I hadn’t seen this particular story, but I love the series in general. Marguerite Bennet makes some of my favorite characters feel right at home in World War II, and her stories are a fun mix of fantasy and horror and fight scenes. 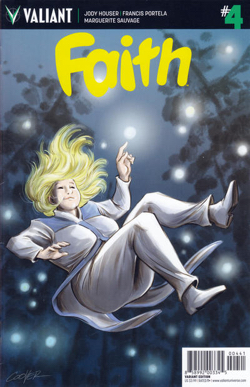 In this case, however, I feel like the creative team missed a real opportunity. The artwork, by Sandy Jarrell, tells the story beautifully, but the range of physical types is extremely limited. All the women seem to have the same body type, whether they are American or Roma or Polish, whether they are young women or mothers or grandmothers. Even the faces are similar, with hair color the only trait that differs from one to the other. It’s wonderful to see Jews and gypsies and softball players share an adventure, but it would be even more wonderful if they seemed like individual women, not generics.

As a palate cleanser, let me recommend Faith. I think this is the first Valiant comic I’ve ever bought, and it’s so much fun. Faith Herbert is a super heroine. She has a job. She has a sex life. She has interests that extend beyond these three areas. She’s fat and she wears spandex because that’s what lets her do her super-heroing.

This book is as refreshing as iced mint tea on a summer day. Have some!