Ed Catto: More Valiant Than Ever 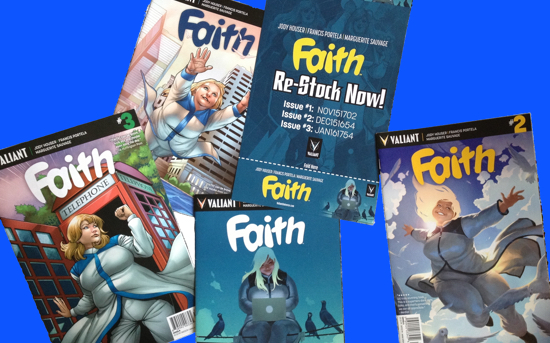 A few weeks ago I wrote about the fantastic experiences I had years ago working with the first iteration of the company that we know today as Valiant. I was in brand management in Nabisco on OREO cookies and was introduced to the company (on a professional basis) through a wonderful guy named Seymour Miles. He was responsible for Ad Sales and Custom Comics. Of course, as a lifelong fan and comics enthusiast, I knew all about Valiant and was enjoying their innovative comic line.

I was also being pitched by Marvel, DC and Malibu comics, but those are stories for future columns.

Fast forward to today. Valiant jumpstarts with the 2.0 version of the company and continues to innovate and provide great storytelling for fans.
The new organization is a “perfect storm” creatively driven by a fan-turned- entertainment entrepreneur, Dinesh Shamdasani. He has boundless energy, and projects a vision that pulls and impressive team into his orbit. 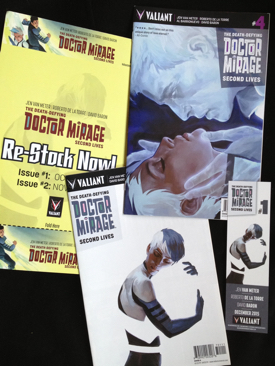 Fred is a long-time comics guy, having worked at a myriad of positions over the years, including the previous incarnation of Valiant. Hunter is the type of guy who embraces his professional mission and explains his tasks and goals with the mischievous glint of a dedicated comics fan. Gavin is newer to comics but has great respect and understanding of the industry and for fans.

My first meeting with Gavin was a crazy start to our relationship. It was on a train during my regular commute from New York City to Ridgewood, NJ. It was crowded, as it often is. We were all standing shoulder to shoulder. I couldn’t help looking over my shoulder to see who that the guy was reading a preliminary script for Bloodshot #1.

We struck up a conversation and I explained who I was and my background with Valiant. He introduced himself as Gavin Cuneo, part of the new Valiant team, and then we were surprised to find that we were both Ridgewood residents.

And today, he’s more engaged than ever. “As we approach the fifth anniversary of Valiant’s return to publishing in 2017, we’re accruing more new interest with each passing month,” said Gavin. “First-rate story content has always been at front of mind for Valiant, and that principle continues to resonate across the entire company – from sales to marketing to licensing to social media.”

“To my mind,” he added, “we’ve built the most knowledgeable, passionate, and effective management team in comics. Their dedication to keeping Valiant vital for fans and retailers worldwide continues to make us a formidable presence in the marketplace, even as Valiant expands into other media forms.”

It’s all about the comics

It’s easy to tell that this company is all about comics because the offices are packed with comics. There are boxes and shelves of comic everywhere. And despite the entrepreneurial frothiness of it all, everyone there knows just where each comic is.

Someone will shout out, “Can you get me that last issue of Bloodshot and the hardcover collection of The Valiant?”

And then there’s a rapid response: “Sure – here they are!”’ 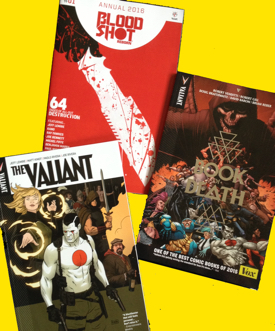 Wearing Out Shoes at All Those Conventions

Valiant genuinely supports comic conventions. Not just the huge ones like San Diego Comic-Con and New York Comic Con, but a wide range of conventions.

Late last year, at the inaugural New Jersey Comic Expo, you could tell the Valiant booth team loved being there, meeting fans and spreading the word. And just recently at Awesome Con in Washington, DC, Valiant was one of three publishers beating the drum on the convention floor.

Their love for conventions seems so legitimate – it’s not just about packing and unpacking an exhibition booth. You get the sense that this company loves their fans and wants to be at the right places to meet both existing and potential fans.

Gavin and Fred take a lot of pride their retailer efforts. Led by Atom! Freeman, Valiant is an organization that takes their sales channel, the comic shops, seriously. They court the stores, sell hard and work to provide retailers with what they need to sell their books.

And these folks don’t just sit in their ivory tower. They put their money where their mouths are.

Atom! Freeman is part of this comics retail team. He’s a guy who knows his stuff and loves the industry. In his former life, he was an Eisner-Award winning retailer. Now he’s leading a team of folks who are all about interfacing with the retail community on behalf of Valiant.

While the bigger publishers cut back on their interaction with comic shops, Valiant seems to be going the extra mile. And I mean that literally as well as figuratively.

Atom! explained to me that they rotate the staff so someone’s always on the road visiting comic shops on Wednesdays (news comics day) and weekends. And more often than not, they’re driving their Valiant-wrapped Chevy. 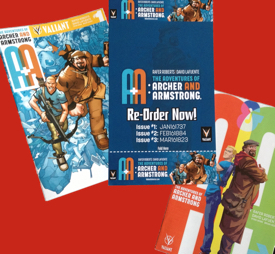 Russ Brown leads their licensing and partnership efforts. He’s a long-time industry and licensing guy, with a contagious enthusiasm focused on business that makes it seem like he’s fresh out of Wharton.

Russ took me through several of the recent licensing deals that Valiant has struck, and in much the same way a coach of a winning team is proud of each student, he’s excited about each business relationship.

“Each and every month, Valiant is forging new opportunities with an impressive and wide-ranging slate of partners,” said Russ. “We currently have nearly 100 active licensees, which is practically unheard of for a company of our size and relative footprint. At the end of the day, you can credit that to one thing – the strength and diversity of the Valiant library and still-insatiable interest that these characters inspire in fans around the world.”

All the deals are put together with the ultimate goal of pleasing fans, but that doesn’t mean the Valiant folks aren’t very pleased too. And there are a lot of deals. The sheer quantity is very impressive. But they are aimed at building the Valiant brand.

“From longtime icons like X-O Manowar and Bloodshot to relative newcomers like Faith and Divinity, the library is richer and in higher demand than at nearly any other point in Valiant’s 25-year history,” added Russ.

Valiant is on a tear with a busy summer of announcements, solid comics and a big hit with the recent comics series Faith.

I enjoy reading the comics. But as I get to know the entrepreneurial vision and stories behind the stories, I respect Valiant as an enterprise all the more.

“From the runaway success of Faith to the massive plans outlined for the 4001 A.D. event this summer, Valiant has never been stronger,” said Publisher Fred Pierce. “2016 has truly shaped into a banner year for our publishing line, as we continue to influence the industry with our innovative ideas and compelling stories. We’re excited for what the future holds as we continue to grow and introduce Valiant’s story-first approach to comics to an even larger audience.”