Mike Gold: Our Own, Personal, Joker 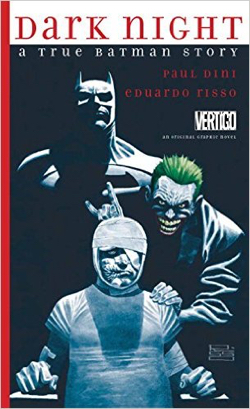 Wow. This one is tough.

It’s tough to read, it must have been tough to write, and knowing that makes it even tougher to read. Of course, doing so is at the reader’s discretion. The writer had no choice but to live it.

Dark Night is subtitled “a true Batman story” and, well, it is. It is true, and it is a Batman story. And it’s Paul Dini’s story.

Paul is one of those people who needs no introduction. However, if I don’t give him one I’ll be taunting the ghost of my junior-year high school journalism teacher, and after reading this book I don’t want to piss off anyone in the ecto-sphere. Mr. Dini is the well-celebrated writer of animation, television, video games and comic books. He’s perhaps best known for his work on Tiny Toon Adventures and on Batman: The Animated Series. Oh, yeah, and he co-created Harley Quinn with animator Bruce Timm. Now that I’ve made the late Mr. Koerner happy… 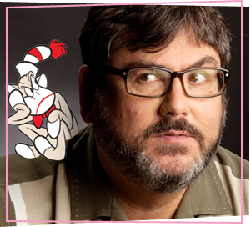 Some two dozen years ago, Paul was walking home in the dead of the Los Angeles night and encountered a couple of muggers who proceeded to beat the crap out of him. Surgery saved his sight and time put the rest of his pulped body together, although – of course – the psychological scars are far more enduring. Your brain scoops up all kinds of life-long memories and turns them up to 11, distorting them like two elephants mating on a wah-wah pedal. The inner-dialog never really ends, even while you try to figure out how to stuff it in its place. In this telling, Paul uses the characters of the Batman, the Joker, Two-Face, the Penguin and, yes, Harley Quinn as that inner-voice, all the while revealing the youthful neuroses common to those of us pop culture fans of baby boomer vintage.

It’s a harrowing experience made all the more horrific for the reader by knowing it’s a hell of a lot easier to read than it is to live. For those few who have never endured any degree of that experience, let me tell you this: releasing the story might be cathartic, but taking another peek into Pandora’s Box is risky to say the least.

Paul Dini is and has been one of the best comics and animation writers of the past 30 years and if all you’ve done is read and watched his stuff, you might not have known of his travails. While writing Dark Night might be his crowning achievement (after all, how you do top your own bloody, painful near-death experience?) in so doing he has taken American graphic novel writing to a whole new level, combining his life, his obsessions and his lifelong fictional posse to reveal a journey no one in his or her right mind would ever want take. People will be studying this book in writing schools forever.

I said this is Paul’s story, and that story is so overwhelming that at first reading you might miss the power and proficiency of artist Eduardo Risso’s work. Don’t worry; it’ll hit you once you wrest your nose from your belly button. Known for his work on 100 Bullets, Alien Resurrection, Wolverine and that other Dark Knight book released this year, his efforts are every bit as worthy as the story. Whomever put together that creative team – Paul, and/or editor Shelly Bond (who will be missed at DC) and/or others – hit the nail right on the head.

A non-fiction story co-starring Batman. Damn. This one was tough… and worth it.

Personal note: Really glad you made it through, Paul!