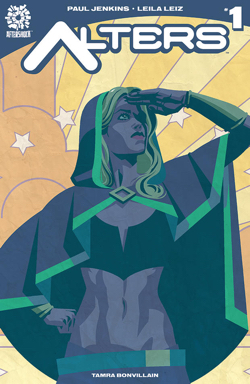 Last week it was announced that Aftershock Comics will be launching a new superhero series in September named Alters. The series will be seasoned comic writer Paul Jenkins’ second title with Aftershock, and it’s drawn by Leila Leiz. Though it will feature a few different kinds super powered humans, referred to as Alters in this world, the central character currently getting all the buzz is Chalice.

The gravity manipulating Chalice will be joining the ranks of characters like Coagula on the incredibly and embarrassingly short list of trans superheroes in comics. The hook for Chalice is that while Chalice presents as female, her civilian alter ego presents as male under the name Charlie Young. At the start of the story, Charlie is a college student who is currently transitioning in secret to Charlie’s family, though some friends may be aware. We just don’t have all the details on that yet.

Paul Jenkins himself is a straight cis white man, which he will readily admit. His mother who raised him is an out lesbian and he’s stated before that diversity is important to him, though in this case we should be careful not to conflate sexual orientation and gender identity. Mr. Jenkins in particular had in mind to put a trans character in this series from its onset. According to his own account, Chalice didn’t fully come into being until he met Liz Luu at a convention panel who suggested the idea of a trans superhero who had not yet transitioned and who could only present as the gender they identify as when in superhero attire.

With that in mind, I can’t help but be cautious about the idea. Before even delving into the concept behind Chalice, the initial reason I have for being cautious is that this is a character, though created by well-meaning allies, that did not have a trans creator involved. That is not to say that people can’t create characters outside of who they are and what experiences they have personally had over the years. However, we have seen time and again characters that have been created (or retconned in many cases) to represent the LGBTQ community that haven’t had LGBTQ input over the years with mixed results. Examples include most queer characters in 90s TV and movies, as well as Iceman’s coming out last year at Marvel, despite Brian Michael Bendis’ best intentions, which I wrote about here and here. 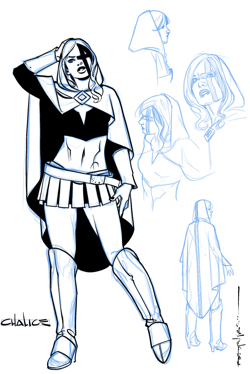 Look, I understand issue #1 hasn’t even hit the shelves yet. However, Aftershock Comics and Paul Jenkins are certainly making it a point to do the rounds and build buzz for the book, and they’re working to get reactions from people. Positive reactions ideally, but still. The idea of a trans character that can only be herself when she’s in her superhero costume lends itself heavily to the tragic queer trope. It’s been done. It’s been done a lot. It was also done in comics like with Batwoman in 2013.

Being queer is not tragic. Being trans is not tragic. Having a character whose tragedy in life is rooted in their queerness is lazy writing and shouldn’t be acceptable to audiences in 2016. Yes, plenty of characters have tragedy that lead them to being superheroes. Spider-Man losing his Uncle Ben, Batman losing his parents, Superman losing his home planet, and so forth. None of them had something tragic about them based on them being cisgender or heterosexual. And to be clear, I don’t mean to be conflating gender identity with sexual orientation with that previous statement. My intention was to address queerness broadly and to stress how those characters mentioned are cis het.

Even characters in teams like the X-Men or Doom Patrol that don’t like the side effects of their powers aren’t burdened by their sexual orientation or gender identities. Hell, Coagula is an out and proud trans woman in her first pages of Doom Patrol twenty years ago. That’s not to say that Aftershock Comics or Paul Jenkins are consciously supporting the tragic queer trope, but that doesn’t change the fact that when you make the central internal conflict of a character their queerness and promote the comic with that as the hook, that you are feeding into that trope.

Beyond the queer is tragic trope, it’s also made clear that this story will involve the character of Charlie Young transitioning in secret from her family. Popular media is obsessed with transitioning. Whether it be Caitlyn Jenner, TV shows like Transparent, or movies like The Danish Girl, the media can’t seem to get enough of it. That’s not to say that Charlie Young’s transitioning will not be relatable to someone out there in the trans community just coming out or planning on doing so. However, people like Caitlyn Jenner are interviewed and analyzed by cis reporters, and shows like Transparent and movies like The Danish Girl star cis actors in the lead roles, and characters like Chalice are being written and illustrated by a cis creative team (the colorist is trans, but that’s not a position with creative control in a narrative sense) which means we see these more popular glimpses into the trans community and physical transitioning safely through a cis lense.

They are more than their transitioning, and we need to stop acting like that’s the only story worth telling with trans characters, or even the most important story to tell. Characters who are often played by or written by cis people in the first place, only adding to how cis people use trans people for entertainment, oscars, and pats on the back for being oh so progressive.

Aftershock Comics, Paul Jenkins, Leila Leiz, Liz Luu, and other people who are working on Alters in some capacity all seem to be creating characters like Chalice with the best of intentions. They all appear to have a vested interest in increasing diversity in comics, and it’s certainly nice to see how many women are working on a book like this when the mainstream comics industry still sorely lacks hired female talent, which is something important to Paul Jenkins. Mr. Jenkins also have a history of writing quality comics.

That being said, if you want to tell more diverse stories with rich characters of different backgrounds, then you need to hire people with those backgrounds. We need more diversity behind the pages just as badly as we need them on the pages.

I’m hoping that Alters will be a deeper, richer story for Chalice than the press hits lead on. I’m hoping a character like Chalice may be around long enough to develop and grow into something more than a tragic queer trope and a way to continue feeding these obsessions with physical transitions and people “passing.” Mostly, I’m looking forward to the potential that a character like Chalice could bring to getting more comics publishers to green light more projects with trans characters.

And hey, maybe they’ll even get a trans writer or illustrator on it too.