REVIEW: Eye in the Sky 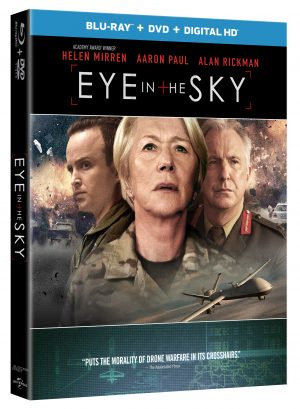 If it takes a village to raise a child, it seems to require an international village to kill a terrorist.  In the contemporary military thriller Eye in the Sky, the moral and legal issues resulting from the decision to launch a drone strike against three of the most wanted causes discussion,  consternation, and a lot of hand wringing. Out Tuesday from Universal Home Entertainment, the movie is available as a blu-ray combo with Digital HD.

Helen Mirren is the woman in the center of the action, orchestrating the American done opeeators, consulting with Alan Rickman, safe at headquarters,  and desperate to take these enemy combatants out. The problem: they are readying suicide bombers in a residential neighborhood so collateral damage is a given so limiting it becomes the challenge as they race against the clock.

Director Gavin Hood wrings as much tension out of the situation for 92 minutes, but he is hampered by the reality that the key players are never together.  Instead, we watch reaction shots and debates occur and really, editor Megan Gill gets all the credit for sustaining the tension.

Mirren’s desperation grows as every time she is ready to give the kill order, everyone wants to run the risk assessment again and higher up the chain of command.  Aaron Paul and Phoebe Fox are in the bunker, controlling the drone and he actually refuses an order to fire at one point, seeking verification about a little girl selling bread next to the target. According to a consultant who watched with me, he was in the wrong especially in front of a junior officer.

The reliance on technology and law protects hut hampers the efforts and brings up interesting themes for post-viewing discussion, the film itself, though, has lots of the right elements and several solid performances but is less than the sum of its parts. It just doesn’t hold together and sustain interest.

The high definition tansfer is crisp as is the audio.  The film comes with a mere two electronic press kit packages about the themes and totally underwhelms. Considering this is Rickman’s final film, I just wish it was overall a better experience.