Marc Alan Fishman is Catching Up With Gotham 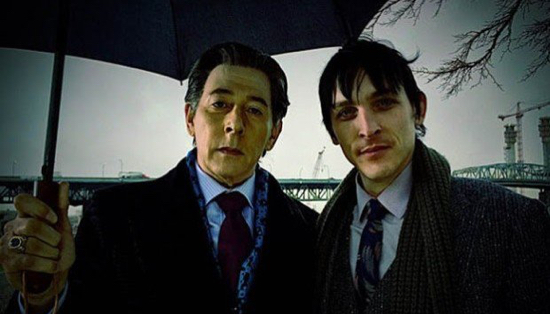 With the current crop of network TV shows all ending for the season, I thought I might double back on a show I’ve checked in on a few times in this column. Gotham has been a guilty pleasure since the start. As much as my betters at the AV Club like to poke fun at the show’s inconsistent tone, it never struck the nerve as hard for me as them (and, I’ll feign a guess, hopefully others). With The Flash and a few other appointment-worthy shows off my DVR, I binged through the back half of Gotham one episode a night for a little over a week. And here with the final installment digested, I’m ready to deliver my verdict.

Saddled with the moniker Wrath of the Villains for this portion of the season, Gotham as a show shifted its focus to the once very-out-of-focus “Indian Hill” facility below Arkham Asylum. B.D. Wong’s Professor Hugo Strange stepped into the big bad role that Theo Galavan had chewed on in the front half of the season. Bruce Wayne, now aided by Lucius Fox, Alfred, and Thomas Wayne’s old super computer, sets to the task of solving his parents mystery.

And Jim Gordon? Well, he was as grimacey as ever, having once again crossed the line between law abiding Commissioner-In-Waiting and monster. Oh, and Edward Nygma was now off the leash of quasi-villainy. And the Penguin was locked away as a plaything for Hugo Strange. Whew! And with all those moving parts, I truly liked the show.

The Gotham incarnation of Hugo Strange – not unlike the Matt Wagner penned Batman and the Monster Men series – sees the philosophical Hugo playing mad scientist with the various living and less living goons, crooks, cranks, and in-patients that Arkham belches forth. It’s clear to anyone who has read a comic book that this device would lead eventually to a litany of otherwise impossible freaks from the Bat-cannon. The storyline eventually gives us Mr. Freeze, Azrael, and Firefly – in addition to a plethora of as-yet-unnamed ne’er-do-wells to act as the future villains of the week.

As with plenty in the series, Gotham finds a way to add a bit of hipster verve to these well-worn characters. Firefly, for example, is reborn with new origins that trump any comic counterpart I’ve ever read for the character. As a closeted pyromaniac slumdog living and working with a crew of crooked brothers, the Hispanic Michelle Veintimilla brings a creepy hidden villainess beneath layers of downtrodden physical and emotional abuse. It’s a depth not really afforded to the character in any incarnation I’d seen, and the show is brightened by the addition almost. We’ll put a pin in that.

Some of the storylines really came into their own. Both Penguin and Nygma continue to steal every scene they’re in. With a jaunty cameo by Paul Reubens as the long lost father of our little Oswald, we got to see a retread of Cobblepot’s journey from picked-on put-upon straight through to raging psychotic. While the family who secretly conspire to murder the unsuspecting rich ninny was perhaps a little to worse for wear as predictable dreck… it served its purpose to allow Penguin to reclaim his former self. This is of course after the psychotropic experiments of Hugo Strange. An arc without a purpose, save only for wasting time. At least it was entertaining.

Elsewhere Nygma gave birth to his first riddle-based crime. But unlike the often-predictable cash grab or mental chess game… Gotham’s Riddler had the endgame all along; to frame Jim Gordon for murder to remove him from discovered Nygma’s rage-induced murdering of his would-be-beau not so long ago. Again, the story itself wasn’t ever going to win an award for originality, but the performance of our quizzical crook kept it very watchable indeed.

As we rounded second base in the back half of the season, Strange’s master plan was revealed. Spoiler Alert For Those Who Care: Seems Indian Hill, and all the work by the good doctor was in effort to reanimate the dead. And while my geeky heart rooted for an eventual Solomon Grundy, instead we crossed the line from good to goofy right at the event horizon. Theo Galavan’s floating corpse is brought back to the land of the living in part because of Mr. Freeze’s cryogenic research, coupled with the longstanding work of Strange. But the Galavan the show once depicted as a cold and calculated Bruce Wayne on his worst day, here we’re treated to a scenery eviscerating lunatic spoon-fed the Order of St. Dumas in order to claim his new identity as Azrael. Oh, and he’s also mildly invulnerable to pain, super strong, and crazily agile. Because… why not.

It’s here, with this final master stroke Gotham began to unravel at rapid speed. I’ll spare you the full recounting of it all. Because what matters comes in the end game that’s offered to us in the parting shots. Fish Mooney (yes, you read that right) is back where she started – now with super mind-control powers (because… science). Penguin may very well return to his butler boy status under her Press-On nails. Bruce is still forever brooding. Selina is forever vexxing. And Bullock is acting captain of the GCPD.

None of it is cannon, or even close to it. Jim Gordon is off to find Lee Thompkins for a “don’t get your hopes up” rekindling of romance. And a bus full of CGI and prosthetic makeup toting villains now litter the unkempt corners of Gotham for the season to come in the fall. Because the show spent so long making the attempt to broaden the horizon of an already packed show, to see the ending of this season simply reset the status quo is dirty ball that doesn’t make me excited to return.

But that’s how it goes. Because… It’s Gotham.