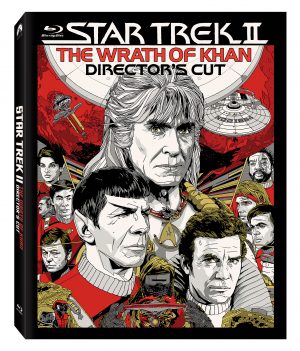 Home Video fans have a lot to look forward to as Paramount Home Entertainment releases a variety of Star Trek material this year. First up and arriving Tuesday, just days after its 34th anniversary is Star Trek II: The Wrath of Khan Director’s Cut. This is the first time director Nicholas Meyer’s version of the now-classic film is available on Blu-ray.

There’s little left to say about just how good the film is and looking back, we can easily see the affection both cast and crew put into the production. There was a gamble in bringing in Harve Bennett to produce and Meyer to direct only because neither had been a part of Trek previously and Paramount needed the film to be a major success to salvage the franchise.

Thankfully, Bennett understand the genre and Meyer was a gifted novelist and filmmaker so got down to the core elements. He let the characters age and made that a theme of the film along with the story of revenge using Ricardo Montalban’s driven Khan Noonien Singh. Additionally, Meyer moved away from the bright, sterile Enterprise that Robert Wise envisioned in the first feature. It was darker with, as he put it, “more winkie blinkies”, the lights that made the bridge feel purposeful.

We warmed immediately to the film in part because from the outset the ensemble was present, active, and demonstrating the camaraderie we came to love about the original series. James Horner’s nearly pitch perfect score added an emotional depth coupled with ILM’s cutting edge computer effects.

The Director’s Cut restored three minutes of bits of business and reframed some scenes but didn’t include everything and I still miss the exchange between Spock and Saavik that revealed her to be a Romulan-Vulcan hybrid. The pacing and tension remains intact and the film still rivets you to the seat and brings a lump to your throat as you watch Kirk and Spock say goodbye.

The high definition transfer is solid, working from the original negatives. If anything it’s a little dark and you’re conscious of the film stock’s grain but these are minor quibbles for an older film.  The 7.1 Dolby True HD audio track is a fine complement.

All the original extras from the DVD edition are intact including Meyer’s Audio Commentary on the Theatrical and Director’s Cut, Meyer and Manny Coto’s commentary on the Theatrical version, and Michael & Denise Okluda’s text commentary on the Director’s Cut. Additionally, you get Captain’s Log (27:00) comprised of Designing Khan, Original Interview with DeForest Kelley, William Shatner, Leonard Nimoy, and Montalban; Where no man has Gone Before, The Visual Effects of Star Trek II, and James Horner: Composing Genesis.

The Star Trek Universe portion contains looks at Collecting Star Trek’s Movie Relics; A Novel Approach as buddies Greg Cox and Julia Ecklar discuss the Pocket Books program; and Starfleet Academy: The Mystery Behind Ceti Alpha V. You also get Farewell, Meyer’s tribute to Montalban who died in 2009; Storyboards, and the Theatrical trailer.

New to the disc is a 30 minute featurette, The Genesis Effect: Engineering the Wrath of Khan. Here, Meyer, producer Robert Sallin, producer Ralph Winter, and journalists Mark Altman and Larry Nemecek walk you through a condensed version of how the second film in the series was made. Sadly, this was produced after both Bennett and Nimoy passed away last year although Adam Nimoy briefly fills in for his father and Sallin gives Bennett his due. A handful of others, including The Big Bang Theory’s Bill Prady, discuss repeatedly sitting in the theater and reacting to the film, notably Spock’s death. It’s a nice tribute to a wonderful film.

Is it worth owning for the high definition version and 30 minutes of talking heads? That’s purely your choice but for me, I was transported and delighted, sucked in all over again.