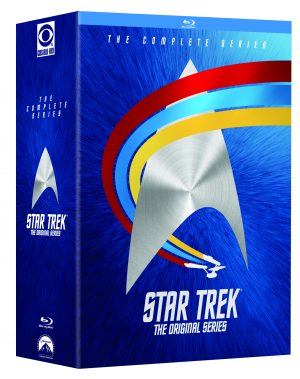 Summer is here and that means it’s time for racing in the streets. Or, if you’re not Bruce Springsteen, it’s a time for rest, relaxation, and binge watching. For nostalgia fans from various generations, CBS Home Entertainment is offering up a tasty assortment of television series from country comedy to ripped from the headlines detectives to our favorite science fiction.

The gem of the set may be the complete Blu-ray sets of Star Trek and Star Trek: The Next Generation, part of CBS and Paramount’s celebration of Gene Roddenberry’s creation.

Here are the details:

Join the Clampett family as they move to the most famous zip code in the world when the seven-time Emmy award®-nominated series THE BEVERLY HILLBILLIES: THE OFFICIAL FIRST SEASON arrives on DVD April 26 from CBS Home Entertainment and Paramount Home Media Distribution. This special collection not only includes digitally remastered episodes with upgraded picture and sound, but also features the original extended pilot episode. Rarely seen, this episode offers a special glimpse into TV history with an unfamiliar intro to the new series, The Hillbillies of Beverly Hills, extended scenes, and staged vignettes featuring as-yet unseen characters destined to become one of America’s most favorite TV families.

Full of down-home charm, THE BEVERLY HILLBILLIES: THE OFFICIAL FIRST SEASON includes all 36 episodes of the debut season and follows the Clampetts, Jed (Buddy Ebsen), Granny (Irene Ryan), Elly May (Donna Douglas), and Jethro (Max Baer Jr.), as they accidentally strike oil on their land and move from their backwoods cabin to a Beverly Hills mansion. On their journey to fulfill their dreams of swimming pools and movie stars, their humorous hillbilly lifestyle clashes with the “city folk” of Beverly Hills. 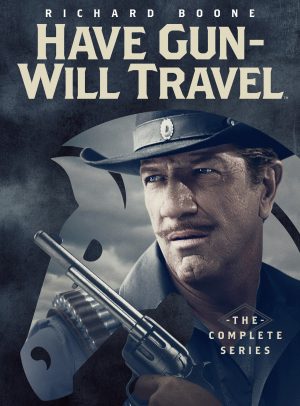 Headlined by Richard Boone in his iconic role as the gentleman gunslinger Paladin, Have Gun – Will Travel: The Complete Series arrives in new shelf-friendly packaging with all 225 unforgettable episodes of the celebrated Western on a 35-disc set. A master of languages and fighting arts, and one of the fastest known gunslingers, Paladin travels the desolate desert of the Old West to the hardscrabble homesteads of desperate squatters as a mercenary gunfighter. Featuring guest appearances by Charles Bronson and Vincent Price, and writing by legendary Star Trek creator Gene Roddenberry, Have Gun – Will Travel is one of the most beloved Westerns in television history.

Star Trek: The Original Series – The Complete Series Blu-ray features all three seasons of the iconic sci-fi series in sparkling high-definition. Available for the first time in new, shelf-friendly packaging and at an affordable price, the 20-disc collection features all 79 episodes of the iconic series in high-definition, alongside a trove of bonus material fans will love.

Starring William Shatner, Leonard Nimoy, DeForest Kelley, Nichelle Nichols, James Doohan, Walter Koenig and George Takei, Star Trek follows the celebrated crew of the U.S.S. Enterprise as they embark on a five-year mission to explore the galaxy. The Enterprise is under the command of Captain James T. Kirk (Shatner). The First Officer is Mr. Spock (Nimoy), from the planet Vulcan. The Chief Medical Officer is Dr. Leonard “Bones” McCoy (Kelley). With a determined crew, the Enterprise encounters Klingons, Romulans, time paradoxes, tribbles and genetic supermen lead by Khan Noonian Singh. Their mission is to explore strange new worlds, to seek new life and new civilizations, to boldly go where no man has gone before. 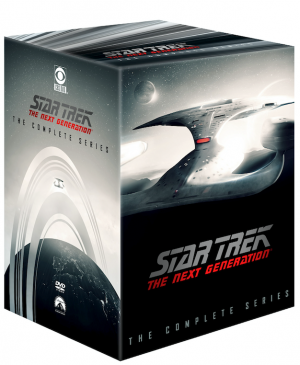 Dive into all seven seasons of the iconic sci-fi series when Star Trek: The Next Generation – The Complete Series arrives on Blu-ray and DVD. Featuring new shelf-friendly packaging at an affordable price, the collections feature all 178 episodes on 41 discs (Blu-ray) and 48 discs (DVD), and both are packed with hours of bonus features.

Set in the 24th century and decades after the adventures of the original crew of the starship Enterprise, this beloved series is the successor to the original Star Trek. Featuring one of the most endearing ensemble casts in television history, Star Trek: The Next Generation took fans on the remarkable continuing voyages of the starship Enterprise with Captain Jean-Luc Picard

Both complete collections will also feature a trove of bonus materials adding up to hours of added content that takes fans behind the scenes of the cultural phenomenon of Star Trek: The Next Generation. The Blu-ray collection also includes recently produced documentaries, cast and crew interviews, and the must-watch cast reunion roundtable that was shot in celebration of the iconic series’ 25th anniversary. 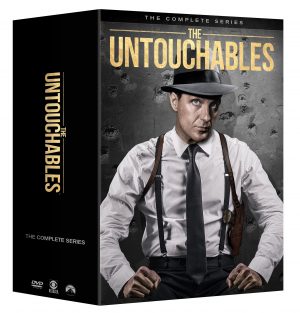 The Untouchables: The Complete Series
Release Date: May 10, 2016

Witness every episode of the powerful, hard-hitting American crime drama, The Untouchables: The Complete Series. Set in Chicago in the 1930s, The Untouchables is based on the autobiographical memoir by real-life Prohibition crime fighter Eliot Ness, portrayed by Robert Stack who garnered an Emmy® award for his performance. The series chronicles Ness and his special team of agents, nicknamed “The Untouchables,” and were all handpicked for their courage, moral character, and incorruptibility. The famous ensemble cast also includes Abel Fernandez, Nicholas Georgiade, Paul Picerni, Steve London, Bruce Gordon, and Neville Brand. During the four seasons of the popular series, Hollywood icons such as Charles Bronson, Jack Lord, George Kennedy, Robert Vaughn, Robert Loggia, and more also make guest appearances. Available for the first time in convenient, shelf-friendly packaging, The Untouchables: The Complete Series includes 118 episodes on 31 discs.