John Ostrander: He Is Not Who You Think He Is! 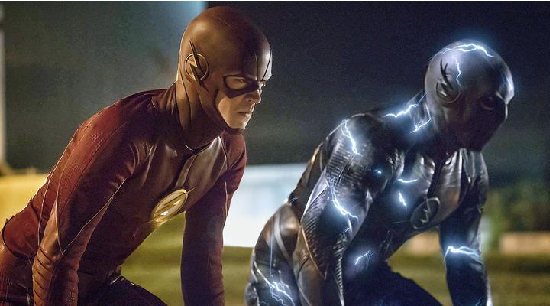 SPOILER WARNING: In talking about the season finale of The Flash TV show, I’m going to tell a few secrets. If you haven’t seen it yet and are planning to watch it later, then you may want to also read this column later.

GEEK WARNING: if you have no interest in superheroes or superhero TV shows, well, if you DO feel that way, what are you doing on ComicMix in the first place?

The CW’s The Flash wound up its second season this week and has re-affirmed its place in my heart as the best superhero show on TV. Well, I don’t watch all of the superhero shows but it’s my favorite of the ones I do watch.

The show has a great cast, strong writing, and a great love of the source material. This comes out in little “Easter eggs.” They’re details that, if you know the reference (in other words, if you’re a geek), it’s an even better moment. If you don’t know, it doesn’t matter; you can still enjoy the story, but knowing it is more fun.

This season the TV show has dealt with Earth-2, a long venerated DC Comics concept. There are many Earths (the concept is referred to as the multiverse) and they are separated by different dimensions. The people on Earth-1 have doppelgangers on Earth-2. For example, “our” Barry Allen is not the Flash on Earth-2. The Flash there is a guy named Jay Garrick, who, in comics, was the original Flash when the character first appeared in 1940.

On The Flash this last season, Jay Garrick comes to Earth-1 to help Barry and his crew deal with this season’s Big Bad, another speedster named Zoom who is bent on stealing the speed from Barry and has already done so to Jay. At one point, we see that Zoom has a prison and in it is a man in an iron-mask being kept captive whose identity is a mystery for most of the season.

If you’re not a geek and not into the show, you probably have a headache at this point. I did try to warn you. And it will get worse.

Big reveal: we eventually learn that Zoom is, in fact, Jay Garrick. I won’t try to explain how that works; it’s all narrative hocus-pocus. It works in context of the show. And Jay is a sociopathic serial killer who now wants to destroy all the Earths in the multiverse save the one he intends to live on as ruler.

Oh, and one other thing. Zoom isn’t really Jay Garrick, either.

Zoom, in fact, is Hunter Zolomon who also has a doppelganger on Earth-1 and to whom we were introduced earlier in the season. The Earth-1 Hunter Zolomon is really kind of nobody, just like the Earth-2 Barry Allen. It turns out that the real Jay Garrick, the Earth-2 Flash, is that captive Zoom has in the iron mask. Dampers in the mask keeps him from using his powers.

In this season’s penultimate episode, Zoom kidnaps Barry’s father (John Wesley Shipp, remember; try to keep up) and kills him before Barry’s eyes in an effort to get Barry to race him. The race will power a doomsday device that will destroy the multiverse save for Earth-1. Well, the bad guy has to hang his mask somewhere.

That all happens and it includes a really sweet shout-out to how Barry Allen/the Flash died in Crisis on Infinite Earths. (He got better; this is comics, after all, but the moment is legendary.) Zoom is outwitted, defeated, and destroyed in a most satisfying manner.

At that point, we meet the real Jay Garrick, an important character in DC lore. And he is played by… John Wesley Shipp! It turns out that Barry’s Dad had a doppelganger on Earth-2 and it’s Jay Garrick. What’s really nice is that, by the end of the episode, we see Jay Garrick in a Flash costume which is terrific because it’s a shout out and a salute to the fact that Shipp played the Flash in the 1990 TV series.

That’s what I’m talking about. If you don’t know all that it doesn’t affect enjoying the show but knowing it only makes that moment the sweeter. The 1990 series only lasted one season and the producers of the current Flash would be entirely justified in ignoring it but they keep faith with it. They honored it, the actor, and the fans who watched the show and remember it. You know; geeks like me. And I’m deeply appreciative. It’s that level of thought, of consideration, that makes me love this show.

There’s a lot more I could say about the finale and maybe I will in some future column. You have been warned.

I’m eagerly awaiting what comes next.