Mike Gold: Freedom of Speech Without Freedom to Listen? 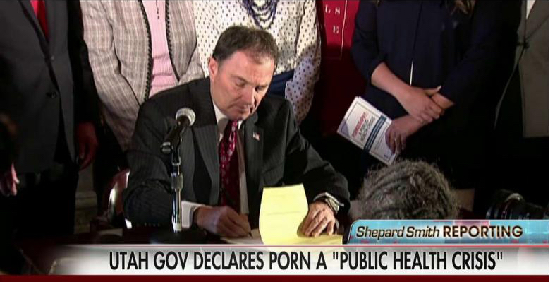 Who decides what is pornography? Who gets to stop people from seeing it? And why do they bother?

A Utah state senator got a bill passed declaring pornography a public health crisis. It’s been a while since I’ve been in Utah, but I was in New York City a couple days ago and I figure if porn is a “public health crisis” in Utah, there would be some sign of that in the Big Apple. I saw no signs of any public health crisis whatsoever. I asked my fellow ComicMix columnist Mindy Newell if she’s seen any signs of a porn-related health pandemic; by day Mindy’s an operating room nurse in the New Jersey portion of the metropolitan area. She acknowledged that pornography might be a threat to the health of certain religions that maintain broad governmental power, but it’s not a physical health threat like, say, the ebola epidemic.

Of course, true freedom of religion must include a person’s right to not be held to the religious standards of others. According to the Salt Lake City Tribune, 37.36% of that state’s population is not Mormon and, by federal law, the majority religion has no right to force the rather large minority population of non-Mormons to adhere to its religious predilections.

As I noted, “pornography” is not clearly defined. I understand why: any solid, comprehensive definition must define the bible as pornography as well as www.heresnewtittiesforyou.com… not to mention medical care sites, rape crisis information, psychological and suicide prevention sites, and so on.

Pete Ashdown, founder of a Utah ISP, told the Associated Press that completely filtering the Internet of porn is technically impossible, pointing to China’s inability to stop the courageous rabble from using the Net to foment protest. “Trying to control the Internet in these broad stroke ways never works,” Mr. Ashdown stated. “Whether you’re an autocratic government trying to tell people that democracy is not good for them or an uptight legislator in Utah telling everyone what is pornography and what is not pornography.” His opinion was shared by many First Amendment lawyers and freedom fighters, who note that the state of Utah cannot impose its will onto interstate traffic.

Of course, the electronic book-burners always hide their “moral” inquisitions behind the banner of “we’re doing it for the children.” These people are both liars and fools: the kids are alright, and turning something into forbidden fruit only makes it sweeter.

I simply do not understand why these imperious jihadists do not simply go back to doing what they do best: persecuting homosexuals, the transgendered, and feminists, and where they go to the bathroom.

Better still, go over to the Comic Book Legal Defense Fund’s website and see how you can help stop this madness.