Michael Davis: Back In The Day 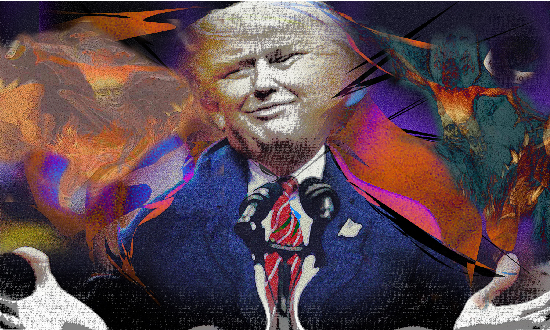 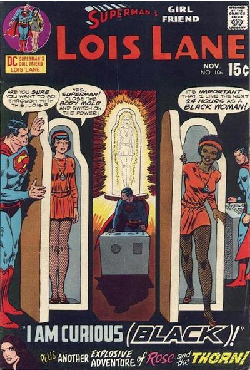 Back in the days of “I am Curious Black,” a 1970 Lois Lane story about Lois using a machine to become a black woman; she does so to see what it was like to be black.

Back then the good folks at DC did not think twice about a black artist or writer. Now, if a story with a black character comes down the pipe, the net is in an uproar if black creators are not involved.

Me? I say the white boys have at it. A good story, like a good character, is colorblind. Trying or even wanting to ban white people from writing black characters is as horribly short sided, stupid, and as prejudiced as banning Muslims from America.

A white writer telling a story featuring a black character is one thing. Telling a story where they try and define the black experience on some level is quite another. To do that… well is not easy.  However, it can and has been done. Stephen Gaghan pulled it off in the film Traffic. That is a textbook example of the black experience written wonderfully by a white person.

On the other hand, the English writer Mark Millar, one of the great comic book writers of his or any generation, gave us Tyrone Cash. Tyrone started out Dr. Leonard Williams, a renowned, brilliant African American scientist who figures out how to gain the powers of The Hulk while retaining his intellect.

What does Dr. Williams decide to do with his newfound power? Why, he does what any black brilliant scientist would do after figuring out how to gain the power of the Hulk yet retains his intellect.

He changes his name to Tyrone and becomes a drug dealer.

As a child, I was happy to see black people in a comic book. Happy even after my mother read the Lois Lane story and asked me, “Why didn’t they make Superman black?”

“Because it’s Lois Lane’s comic!” I said with pride, I mean duh.

If this was such an important story, then why indeed didn’t they make Superman black? That’s what she was saying that my eight-year old brain couldn’t grasp. Seeing such, she moved to the next best thing.

“Why don’t you make a black Superman, Michael?”

“Because DC Comics would commence a legal proceeding against me for copyright infringement. They have the means and the will to do so. My God, woman perhaps you should stop working seven days a week at those silly two jobs and get with the program.” I said.

I didn’t say that I was eight. To me copyright meant copy something right.

What I did say was “Because Superman is white.”

Turns out decades later I co-created Icon, a black Superman if ever there was one.

Icon, Static, Hardware and the Blood Syndicate were met with overwhelmingly positive reviews from most. I heard ‘its about time’ so often I was convinced people thought the books were about a black Doctor Who.

Many met these heroes with a deep anger and resentment. Nobody talks about the hate mail received but as always when black people make significant inroads into a category once denied then made difficult there’s always a “stay in your lane nigger” component when finally, people of color arrive at then enter the door.

Those letters were scary, but what was scarier was the attack those heroes took from other black creators, attacks that were brutal, horrible, and damaging. The company line was never to respond. I didn’t agree then, and I do not agree now. I feel you cannot let others define you.

That’s why I’ve spent the last 20 plus years setting the record straight.

I realized something the last time I spent part of my weekend in jail.

Yep, you read that right.

I was in a restaurant in a lovely neighborhood – mine. Two white guys ran across the floor and attacked me. Little known fact: although it’s called something different, California has a stand your ground law not unlike what they have in Florida.

I stood my ground, and I was arrested.

I realized something while I was unjustly locked up (again, yep again) I realized no matter why we were there, we united like brothers. Black or brown, it didn’t matter.

There was no beef between anyone; no one acted like they owned the place and no one pulled rank. A few hours later, a well-dressed white kid around 20 was let into the cell. It had taken around 12 minutes before he was beaten to a bloody pulp.

No. That did not happen.

The white kid was led to a private cell, we all stopped and looked as the guards walked him pass. “No handcuffs.” Someone noted. I said “They only make them in black or brown.” Even the black guard bringing us our grill cheese and diarrhea sandwich laughed then said; “Maybe if you used that quick wit for something you wouldn’t be here. Ya think?”

Or maybe the powers that be could look at the video and listen to eyewitness accounts instead of arresting the black guy who was defending himself.

No one got upset when the white guy was given a private cell, although nothing would have happened to him if placed in with us. Why would it? No one was upset the white guy received special treatment because we all knew this was the way it was.

Back in the days of Lois Lane’s “Black Like Me” moment DC and Marvel gave little if any thought to black creators when deciding to do a story about a character of color. They didn’t have to; they do now.

I am glad they do now if Marvel and DC would stop giving the general pubic the impression they are the kings of diversity that would be nice. The so-called black Avengers, black Captain America, black/Latino Spider-Man, black Batman, black Superman and the rest did not issue in the modern age of diversity.

Icon, Static, Hardware and the Blood Syndicate did that, 23 years ago and Brotherman did it 25 years ago.

Notwithstanding a full quarter century of remarkable black content, the perception among most black and white young fans is still, if Marvel and DC don’t do it, it matters little if at all.

There exists a serious movement among some in the black comic book community to bring black comics to black and mainstream audiences. Notable among those fighting the good fight, Mala Crown Williams and MECCA Con, the Black Age of Comics Convention, Ryn Ryonslaught Fraser and his wonderful World of Black Heroes website… and no one works harder than John Jennings. Still, there also exists an insufferable discord among some black creators.

Now is the time for that shit to stop.

Back in the day when successful black comics received hate mail black creators were in charge of their voice. If we responded or didn’t, we had a choice to do so or not. That was our right. That a right many of us take for granted

When DC Comics ran the Lois Lane story “I am curious Black,” that was a noble attempt to show people what life was all about in the community. DC Comics spoke for us because we had no voice to do so.

Yeah, we had a ‘right’ but no voice within comics to speak for ourselves.

I had little choice but to love seeing Lois Lane as a black woman. Love it or leave it was my only option there was nothing else out there for me.

Some choice exists now in comics for kids, and I’ve always had a choice rather or not I’ll be arrested again.

I can stay out of restaurants where I’d be one of a handful of people. I could avoid specific concerts, plays, sporting events or anywhere where being an African American man would be an issue.

I could just stay home.

That’s my choice and the choice of every man. But I have a right to live where I want, eat where I want and do what I want within the law. That sounds grand, but the reality is the ‘law’ hasn’t worked for me.

The comic book industry, such as it needs to face some serious certainty. Yes, we can voice our opinions but even today those of us who create African American content for the mass market are taken less seriously unless it’s from Marvel or DC.

Bitch all you want. Them’s the facts.

Donald Trump has a real shot of becoming President. Once thought of as a joke that joke is no longer funny. However, it’s not Trump that scares me. What scares me is the massive support of a man who denounces the KKK only after days of defending reasons he didn’t denounce him.

He’s insulted Mexicans, Muslims, African-Americans, women and the physically challenged. He’s never once apologized for insisting President Obama show his birth certificate which is just another way to have a nigger show his papers.

Who supports that kind of person for President? An awful lot or people.

That guy may become President we may be well on the way to the days when Lois Lane and Superman have to speak for us again because what little voice we have now will be even less. What little power we have as comic book creators will be even less than that.

I was in jail six hours before my lawyer got me out. The guard first walking to the white guy’s cell assuming he was “Davis.” When he finally got to me I said “I’m mistaken for short blond white guys often.” No laughter this time.

Leaving the cell, I felt instantly less empowered. You would think I’d feel more empowered. Nope. Locked up, I was part of a group of people who regardless of why they were there were united. Out of jail, I can’t run for a bus if a white lady is ahead of me doing the same.

Regardless of our differences, the comics community would do well to consider what we have to lose if there are so many who want Trump to win.

One last word about Tyrone Cash. Millar should be forbidden to enter America until we figure out what’s going on.