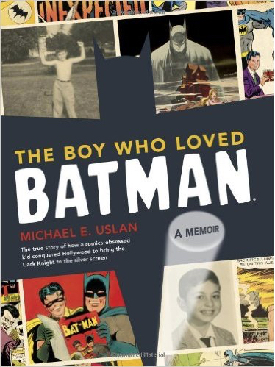 Messrs. Pisani and Uslan, step into the spotlight, center stage and take a bow!

But before we deliver the plaudits, we should perhaps tell you who they are. Of course most of you already know, but there are always a few… well, I don’t want to call them “retards” because that is not politically correct and a crummy thing to say besides, so let’s just identify them as folk who choose not to mingle either physically or intellectually (by acquiring new information) and thus may not be acquainted with the existence of the gentlemen named above.

Mike Uslan is the possessor of the world’s only doctorate in comics, He is a professor at his alma mater, Indiana University, the recipient of a Daytime Emmy, a writer who once worked at DC Comics and he has a producer credit on every Batman movie released since 1989. (For more information, see Mike’s autobiography, The Boy Who Loved Batman, available from Amazon and other book stores.) Trust me – I could go on.

I don’t know exactly how to identify Ken Pisani. I met him a decade or so ago when Marifran, a camera guy, and sound guy and I joined him on a cavernous sound stage in lower Manhattan. The occasion was Ken’s interviewing me for a History Channel documentary on comics. The interview was extraordinarily good and Ken and his lovely wife Amanda have been friends ever since. I’d like to see Ken’s resume because I’m pretty sure he’s done a lot I’m not aware of – he does keep busy being a TV producer, a comic book writer/creator, a screenwriter, a novelist, an art director, a cartoonist…once upon a time, he even worked for Phil Seuling, the man who virtually invented the comic book direct sales market. Amanda knows the full catalog of Ken’s accomplishments. I, alas, do not.

Anyway, that’s Mike and Ken, and I hope they’re taking that bow.

The reason I mention them now is that Ken recently sent me some DVDs from a TV series that ran on Turner’s movie channel. The subject under discussion was the relationship of comic book to early movie serials. The format was the master of ceremonies talking with the comics expert who was – aw, you guessed it – our own Mike Uslan. After a few minutes informative conversation the MC screened two chapters of the serial we’d just heard Mike commenting on. The shows were educational and entertaining – more feathers for the Uslan cap – and they may have taught us comics geeks stuff that we didn’t know. This kind of historical background may not help us do stories, us creator types – I really haven’t decided about that – but it’s kind of nifty to know it.

By the way, in case you’re really out of touch… movie serials were short films shown with main features telling a story over 12 to 15 chapters, each chapter ending with the hero or other good guy in some kind in some kind of horrible quandary. The idea was, you’d return the following week to see how the hero escapes the quandary. Theoretically, you could return to see the hero squashed like a bug, but I don’t think that ever happened. At least, Mike didn’t mention it.

(Editor’s Addendum: Mr. Uslan has been back at writing comics every once in a while, and once again has given us some of the best stuff on the racks. His six-part Lone Ranger / Green Hornet series will be released by Dynamite Comics in July.)