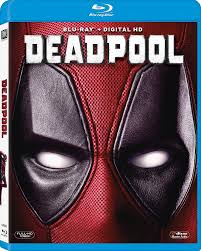 Regardless of whether or not you liked the film, Deadpool and 20th Century Fox delivered the best marketing campaign in years, from initial teasers right up to the Cialis spoof for the Blu-ray release, which came out this week.

Let me say up front that I was never a fan of the Merc with a Mouth from his introduction in 1991 through his overexposure in the comics the last few years. He’s the answer to DC’s Ambush Bug and breaks the fourth wall so often that you just can’t take or his adventures seriously. Seeing him operating an Avenger today is staggering since it forces him to be a grounder player which operates against where he works best.

The film recognizes this and treats him as a live action Wile E. Coyote so there’s a manic feel from the first frame to the last. Everything is there short of the Acme anvil. Was Ryan Reynolds born to play this role? Probably not but he took a supporting role in X-Men Origins: Wolverine and made us pay attention. After a detour to space sector 2814, he’s back in costume and wreaking havoc.

The film takes nothing seriously or for granted and has a great time deconstructing the tropes of the super-hero film and summer blockbuster formula. That it opened in February seems to be part of the joke except the joke was turned on competitors as it owned the box office for weeks. For an R-rated film featuring a relatively obscure character for the non-comic reading masses, this was pretty audacious.

Deadpool also features Colossus (voiced by Stefan Kapičić) so we’re grounded in 20th’s corner of the Marvel Cinematic Universe. But even there they make fun so at one point, Deadpool is being taken for counseling by Charles Xavier, he asks “Stewart or McAvoy?” It even comes with a silly villain, Ajax, a.k.a. Francis Freeman (Ed Skrein) who was birthed at the same Weapon X program that turned Wade Williams into Deadpool.

Director Tim Miller and screenwriters Rhett Reese and Paul Wernick make us feel for Williams as he is horribly disfigured and has his life turned upside down. He takes on Blind Al (Leslie Uggams) as an unconventional roommate and continues to pine for Vanessa (Morena Baccarin), the hooker who got away.

The high definition transfer is deadly serious, seriously good and captures the film’s images just swell using an AVC encoded 1080p transfer in 2.39:1.  The DTS-HD Master Audio 7.1 track may be even better so this will stand up to constant rewatching at home.

There are multiple commentaries that offer amusing insights in the production process and are worth a listen. You can try “Wade”/”Deadpool”/Producer Ryan Reynolds and Screenwriters Rhett Reese and Paul Wernick or Director Miller with Deadpool Co-Creator Rob Liefeld.