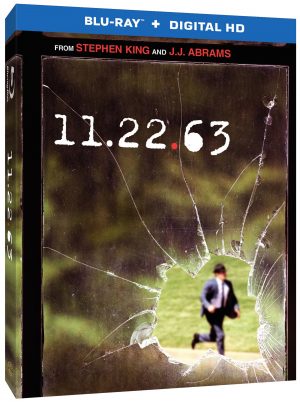 BURBANK, CA (April 26, 2016) – Imagine having the power to change history. Journey with Warner Bros. Home Entertainment to the 1960s with the release of 11.22.63 on Blu-ray, DVD and Digital HD on August 9, 2016.  Executive Produced by Emmy® winner J.J. Abrams (Star Wars: The Force Awakens, Lost), Stephen King (The Shining, The Shawshank Redemption, Stand By Me), Bridget Carpenter (Friday Night Lights. Parenthood), Bryan Burk (Star Wars: The Force Awakens) and Kevin Macdonald (The Last King of Scotland) the event series includes all 8 episodes (9 hours) as well as a brand new featurette. 11.22.63 is priced to own at $39.99 SRP for Blu-ray and $29.98 for DVD.

Viewers hurtle deep into the unpredictable darkness of the American dream. James Franco stars as Jake Epping, a high school teacher at a loss with his life, who wants to make a difference and do something meaningful. Encouraged by his ailing friend (Chris Cooper), Jake journeys back in time to prevent the assassination of President John F. Kennedy. The story transports audiences into the world of 1960s Texas as Jake explores the multiple mysteries surrounding the alleged assassin Lee Harvey Oswald (Daniel Webber). But Jake’s mission faces threats not only from Oswald, but from Sadie (Sarah Gadon), a beautiful librarian he falls in love with, and from the Past itself… which doesn’t want to be changed. And if the Past doesn’t want to be changed, it will push back ­– often violently. With something for everyone, this edge-of-your seat mystery offers an epic and emotional thrill ride.

“We are thrilled to release this historical thriller”, said Rosemary Markson, WBHE Senior Vice President, Television Marketing. “It provides viewers with a great first-hand look into what the 60’s were like.”