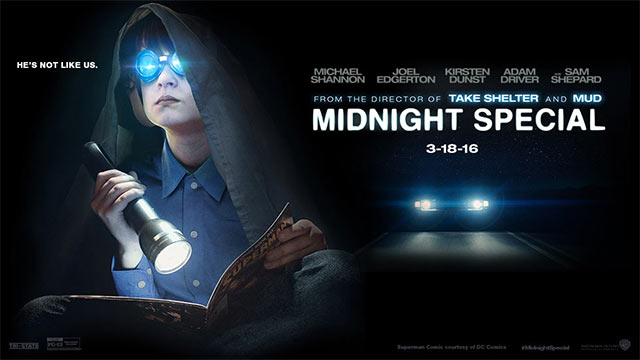 At the theater I see most of my movies at, they sometimes run interviews with filmmakers after the credits. These are never particularly hard-hitting affairs, usually filled with variations on the question “just how is it you came to do such brilliant work on this movie” and so on. After Midnight Special, they ran an interview with writer/director Jeff Nichols where they asked him what it was like to be a writer who only wrote films he was going to direct and a director who only directed films he wrote. Putting aside that this isn’t nearly as uncommon as this interviewer seems to think, it kind of brought in to focus the nagging problem I had during the film; it’s a wonderfully directed movie and only an okay script. There are fantastic, compelling acting performances holding up a script that thinks it’s too clever for context, and a third act that feels utterly without consequence. A movie can go a long way on gritty atmosphere, tension, and a pervasive sense of intrigue, but it can’t quite get all the way to the finish line— and so Midnight Special is a frustrating good instead of a dizzying great.

Midnight Special is about a boy, Alton, with some kind of powers. They’re never made particularly clear, which becomes awfully convenient when they need him to do just about everything to make the story come together in the end. It’s also about his parents who love Alton so much that they’ll give up their lives and endanger innocent people to rescue him from a cult that might not have his interests at heart, but when it becomes clear they might not see their child again they never once tell him they love him or that they’ll miss him. It’s all tight-lipped stoicism and meaningful glances. It’s also about a manhunt to find him both by the government and by two agents of this cult, but the methods of the pursuers are vague and the cultists seem to give up very easily considering they think the boy will bring about biblical judgment. Midnight Special is a movie where nothing feels particularly weighty because nothing makes all that much sense.

There’s a pleasing depth to the world of Midnight Special, and while they drop us right in to the middle of the action it all feels lived in and real. The problem comes in because, while I don’t want more exposition per se, I can’t help but wonder if some of the stories we don’t see on screen aren’t more interesting than the one we’re seeing. The story of an established rural Texas cult refocusing itself around a precocious young boy and rewriting their scriptures, or the story of the NSA discovering that said precocious cult child is spilling national secrets, or even a 20-minute short about how the world would react to whatever the hell happened at the end of that movie. A movie should always try to leave the audience wanting more but Midnight Special left me wanting something completely different and something I’ll never be offered, and that’s slightly less pleasant.

Michael Shannon was seemingly created to be in movies like Midnight Special. He’s quiet, he’s intense, and he can convey an incredible amount of information with his expressions. He’s needed in this movie because while the information might seem thin or a little nonsensical, he can instantly ground it by wordlessly conveying to the audience what it means to his character and how we’re supposed to feel in the audience. He isn’t angry at Alton when the crashed satellite destroys the gas station, he’s afraid— stuff like that. Joel Edgerton and Kirsten Dunst are also very good and they’re acting against the type I have for them in my head, which is nice. They both feel like such substantial presences on the screen and while that might seem like damning with faint praise, it isn’t— their tiniest reaction or mannerism feels gigantic in this film.

I’m unhappy to admit that I was probably wrong about Adam Driver. I didn’t like him for a long time and it seems like he’s a real actor. I didn’t like him in Girls, I still don’t understand why people think he’s so incredibly good-looking, but he was good in The Force Awakens and he’s great here in Midnight Special. He’s firmly in my McConaughey Zone for actors that are going to take me a while to get past their so-so starts to appreciate their good work, but at least the newest inductee has a name I don’t have to look up every time I need to write it down.

It’s great for science fiction that Midnight Special exists. It’s a nice, slower, less special effects intensive kind of sci-fi that has a really good vibe (Alton reading 1980s Superman and Teen Titans comics in the back of the car was an especially nice touch). It’s an emotional film and its an effectively tense film but it never feels particularly clever; it’s a well-decorated house that’s collapsing into a sinkhole. It’s the kind of movie I would stick with if I ran across it on cable but would be not paying attention at all by the end.