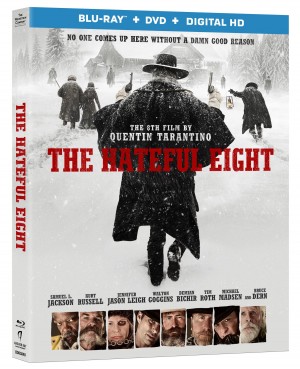 A new film from Quentin Tarantino is never anything short of an event. For his eighth film, The Hateful Eight, he insisted on it being shot in 65mm using Ultra Panavision then arranged with the Weinstein Company to go back in time and release a roadshow version of the film. That is, the 70mm version would play in select theaters and become a Must See film.

The movie is wonderfully cast and beautifully shot with award-winning music from Ennio Morricone. But this is the first time I can say with genuine feeling that I was bored to tears.

Eight people find themselves waiting out a blizzard in an out of the way location, Minnie’s Haberdashery, and no one is as they appear which we learn over the course of two and a half tedious hours. While in some ways this is a thematic sequel to the far superior Django Unchained, this offering lacks the verve of its dialogue and the outrageousness of its characters.

Part of the problem is that fate and a sloppy script bring these eight together and they all seem to know one another in one way or another. Since they all arrive in various ways, it cannot be said to be by design but once they are in the building, its front door repeatedly nailed shut to fight the wind, they talk.

And they talk and they shout and they reminisce and they taunt one another but really, there’s very little said. 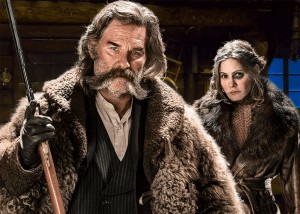 The standard release is 20 minutes shorter and probably a tighter story which may have been prudent. Watching the wide screen version at home, you see the gorgeous exteriors which probably benefitted from lenses but once we’re inside, the feeling of closeness is absent, robbing the film of some of its intended tension.

The thread holding things together, is ostensibly that bounty hunter John Ruth (Kurt Russell) is bringing Daisy Domergue (Jennifer Jason Leigh) to Red Rock to be hung. By chance, the Haberdashery also hosts The Hangman Oswaldo Mobray (Tim Roth), the Sheriff Chris Mannix (Walton Goggins), Sanford Smithers (Bruce Dern), a seemingly addlepated former Confederate General; and Joe Gage (Michael Madsen), a laconic cowboy.  Their host is Bob (Demián Bichir) and one is left to wonder where Minnie is. But central to the story is bounty hunter Major Marquis Warren (Samuel L. Jackson), who forces the issue of race to be discussed in the post-Civil War portion of the 19th Century. Warren has a personal letter from President Lincoln, which makes him a minor celebrity and cause for suspicion.

Told in five chapters, with odd narrative interludes, the story does have a major surprise towards the second half and explains a lot but by then I was beyond caring since things just poked along without being quirky, fun, or engaging. This was a supreme let down from a far better storyteller.

Thankfully, the 1080p transfer in 2.75:1 is gorgeous, one of the bets high definition experiences I’ve had in a while. The immersive DTS-HD Master Audio 5.1 is just lovely.

Ironically, the extras here are uncharacteristically brief, a sign of the film’s box office disappointment. No expense was invested in tricking this out with special features we get a Combo Pack with Blu-ray, DVD, and Digital HD and just the electronic press kit release Beyond the Eight: A Behind the Scenes Look (4:58) and the slightly more interesting Sam Jackson’s Guide to Glorious 70mm (7:49).