REVIEW: The Creeps: The Trolls Will Feast! 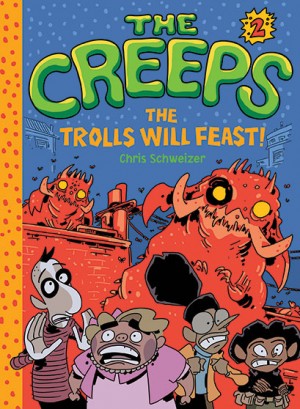 Last August, Amulet introduced us to Chris Schweizer’s middle school gang The Creeps. Their inaugural appearance, Night of the Frankenfrogs, was packed and didn’t entirely work so I was curious to see how he would deepen the characters or expand their world in his sophomore book.

To my pleasant surprise, Schweizer offers up a far more satisfying effort. The kids start off already in trouble with the local constabulary in Pumpkins County but quickly we get the impression bigger problems are developing. Something is interfering with electronic signals so cellphones and Wi-Fi connections are not working. And there’s something about Jock Brogglin that makes him more than just a troublemaker.

In short order, the kids learn from Jock that he is the last survivor of a previous generation of troll fighters and now, after too short a hibernation period, the trolls are ready to attack and feast on the inhabitants. One problem: no one can see the Trolls.

The Creeps need intel and here we learn more about the bizarre beings that are a part of their universe; not just the trolls, but also Mitchell’s older brother. While we still haven’t met their parents, we at least know they are not a collection of single children. Actually, the absence of parental figures rings false as the book opens with the kids in police custody, having their mug shots taken. As minors that would demand parental involvement.

Be that as it may, the four kids – Carol, Mitchell, Jarvis, and Rosario – prove tight and functional with distinctive personalities being rounded out. What seems like a throwaway bit, a video of Rosario singing (very badly) that has gone viral, prove pivotal later on.

Schweizer also gives us Jock, proving not every adult in the books (teachers last time, police this time) are idiots, which is refreshing.

Each of his 122 pages is packed with six to eight panel pages proliferating throughout. At times the pacing is a little off, especially towards the end where it feels like he was cramming things in to finish the story, but it’s all clearly laid out and colored so it makes for a good reading experience for the young adult reading audience.

This is a stronger offering and shows greater command of the characters and their setting so the series is taking on a nice shape.