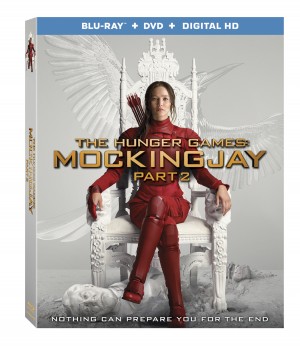 That resulting thud you hear is the disappointing opening weekend numbers for Allegiant, the third part of the four part adaptation of the Divergent trilogy. Its arrival coincides with Lionsgate’s release of The Hunger Games: Mockingjay – Part 2 as a Blu-ray Combo Pack. The commercial demands that the final book of a series be broken into two films made sense for the final Harry Potter novel but certainly not for Mockingjay as witnessed by the poor critical reception Part 1 received in 2014.

Now we have the finale and while stronger, continues to lend credence to the argument it didn’t need to be two separate films (and the year’s wait, in retrospect, was probably a mistake).

The bloom may be off the YA Dystopian rose as the films rushing to the screen in the wake of The Hunger Games’ well-deserved respect failed to measure up. What many of the authors and filmmakers neglected to do was create a protagonist with as many layers as poor Katniss Everdeen.

Fortunately, screenwriters Peter Craig and Danny Strong have not sanded off Katniss’ (Jennifer Lawrence) edges and she remains the most reluctant protagonist in the recent memory. All she wanted to do was protect her sister and bit by bit, page by page, volume by volume, she was dragged kicking and screaming (sometimes literally) into becoming a symbol.

This final installment wavers between her being the focal point of the rebellion against President Snow (Donald Sutherland) and the residents of decadent District 1 and being part of something greater. We see her swearing she will kill Snow and sneaks out of District 13 to make her way to District 2 but then she’s part of Unit 451 and taking orders from others. She is not in the forefront of the fighting, in fact the unit is made of photogenic icons, survivors of previous games and therefore representing the fight against the cruel treatment of Panem’s residents. 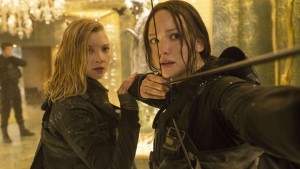 She suffers and is made to suffer as those around her manipulate her mother (Paula Malcolmson) and sister Prim (Willow Shields), her friends Peeta Josh Hutcherson) and Gale (Liam Hemsworth), twisting the Mockingjay to their own purposes. At no point does she really stand up and take control of her own fate and make the demands necessary to be the hero we expect her to. And that is Suzanne Collins’ brilliance in her trilogy, that Katniss remains a heroine thrust into situations by circumstance and struggles to survive, but rarely getting to choose how.

Of the adaptations, this one has the most substantive changes from the source material as the violence is toned down to maintain the PG-13 rating and various threads are dropped or truncated in favor of action, mayhem, and tears. As a result, some characters get short-shrift, notably mom, Prim, and Haymitch (Woody Harrelson). Poor Philip Seymour Hoffman lost his life before filming a key scene towards the end but Plutarch’s hand remains strongly felt throughout. Snow and President Coin (Julianne Moore) deliver indelible performances that help remind us of the political stakes. The screenwriters smartly elevated the role played by Commander Paylor (Patina Miller) so her later participation makes sense.

Director Francis Lawrence makes up for the slog that was Part 1 with a tauter paced tale with sweep and scope. He coaxes nice performances from his cast and delivers a satisfying conclusion to the epic.

The high definition transfer is excellent, preserving the colors and allowing us to see the shadows, notably in the sewer sequence. We can luxuriate in the rich colors of the costumes, explosions, and details in the final scenes. It is well-matched with the Dolby Atmos soundtrack.

The Blu-ray offers up Audio Commentary from Lawrence and Producer Nina Jacobson.

Additionally, we get the right-part documentary Pawns No More: Making The Hunger Games: Mockingjay – Part 2which is 2:30 of detailed behind-the-scenes footage from every possible angle and is fascinating at time. There is also The Hunger Games: A Photographic Journey (10:12), which examines still photographer Murray Close’s career; Cinna’s Sketchbook (10:00), which explores the costuming for the final films; Panem on Display, focusing on the traveling museum exhibits and Jet to the Set, a contest.

Lionsgate has simultaneously released a box set of all four films which boasts 14 hours of bonus content including previously unseen deleted scenes.