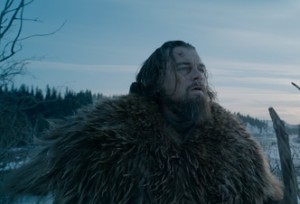 While it’s not a horror title, per se, the film can get pretty gruesome so we purveyors of pop uclture wanted make certain you were aware.

Leonardo DiCaprio stars in one of the most talked about films of the awards season with THE REVENANT, arriving on Digital HD March 22 and on 4K Ultra HD™ Disc, Blu-ray™ & DVD April 19 from Twentieth Century Fox Home Entertainment.  Taking home three Oscars® including Best Actor, Best Director and Best Cinematography, THE REVENANT captivates audiences and was one of the most critically-acclaimed films of the year, garnering over $380 million worldwide at the box office.

DiCaprio gives “a virtuoso performance” (Peter Travers, Rolling Stone) in Oscar® Winner Alejandro G. Iñárritu’s (Birdman) cinematic masterpiece.  Inspired by true events, THE REVENANT follows the story of legendary explorer Hugh Glass (DiCaprio) on his quest for survival and justice.  After a brutal bear attack, Glass is left for dead by a treacherous member of his hunting team (Tom Hardy; Mad Max: Fury Road).  Against extraordinary odds, and enduring unimaginable grief, Glass battles a relentless winter in uncharted terrain. This “boldly original” (Calvin Wilson, St. Louis Post-Dispatch) epic adventure captures the extraordinary power of the human spirit in an immersive and visceral experience “unlike anything you have ever seen” (Jake Hamilton, FOX-TV).