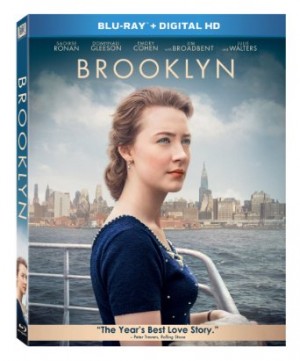 Every now and then, you see a film that transports to you another time and place that feels very familiar but is also alien in many respects. It weaves its magic in subtle and quiet ways so you don’t even realize how transported you have become.

Brooklyn is not flashy but it tells its immigrant story with heart and soul, allowing actors to work through scenes so you feel like you are gazing on the real borough during the 1950s. Based on Colm Tóibín’s novel, the film was adapted to the screen by novelist/screenwriter Nick Hornby and director John Crowley.

This is the Brooklyn where a generation of comic book writers and artists were raised and the one I visited to see my grandparents. It is where a city’s heart was broken when the beloved bums, the Dodgers will soon leave for California.

The sense of change is shocking to Eilis Lacey (Saoirse Ronan), who arrives in 1952, fresh from Ireland in need of a job. Back home, there’s just no work in the post-World War II economy but America is booming with opportunity. Her older sister, Rose (Fiona Glascott), arranges with Father Flood (Jim Broadbent) to bring Eilis over and find her work at a local department store.

Everything and everyone is alien to Eilis who is already shy and homesick so she withdraws even further, failing to successfully bond with the other girls in the boarding house, overseen by Mrs. Keogh (Julie Walters). (Among the residents is Emily Bett Rickards, in a role unlike that on Arrow.) In time, though, she thaws just enough to win over her supervisor Miss Fortini (Jessica Paré) and then capture the heart of the Italian plumber, Tony Fiorello (Emory Cohen).

But she’s not the only one changing. Brooklyn is beginning to alter its complexion as the expansion to the suburbs is underway and as nature abhors a vacuum, new people move into the area. This current is touched on in the finished film but one of the missed deleted scenes emphasizes the point.

Eilis falls in love but when her beloved sister succumbs to a heart condition, she returns home but not before marrying Tony. While home, the differences in culture and attitude deeply affect her and she lingers longer than expected, ignoring her husband’s frequent letters. She is a woman caught in two worlds as the ground beneath is shifting of its own volition.

The film is beautifully shot and superbly acted, earning its 97% freshness rating at Rotten Tomatoes along with the armload of awards and nominations it has garnered. Out now on disc from 20th Century Home Entertainment, this is a cultural and character study well worth your attention. Thankfully, the high definition is pristine and the colors rich and satisfying.

This was a tightly produced film and the 11 deleted scenes that make up the bulk of the special features are all very short and demonstrate how carefully considered each shot and edit was. The optional director’s commentary explains each excision. From the electronic press kit come six promotional features: The Story, Home, Love, Cast, Book to Screen, and The Making of Brooklyn. There is additional, interesting Audio commentary from Crowley. It should be noted that the combo pack comes with just the Blu-ray disc and Digital HD, as the day of the DVD appears to be waning.

This is not your typical ComicMix genre offering but film’s this well-crafted and performed is well-deserving of your attention.