Mike Gold: The Future Is Behind Us 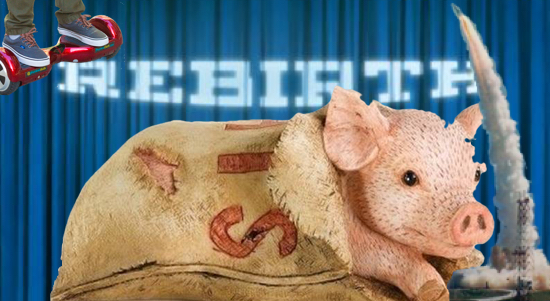 A well-timed survey indicates two out of every three people do not trust self-driving cars. Amusingly, this survey was released just as a Google self-driving car in California became the first of its ilk to cause an accident in traffic. It hit a bus; thankfully, nobody was injured.

Well, gee. When we started our space program, a whole lotta rockets went blooie either on or shortly after leaving the launch pad. We’ve mostly worked that out, although statistically space travel remains just about the least safe way for humans to travel.

One of the top-selling gifts of the recently concluded holiday season (screw you, Donny Trump, it is the “holiday season”) was the hoverboard. This was a locomotive device that did not actually hover. However, it did have a tendency to burst into flames. Retailers pulled the product, and some refunds were offered.

Americans who are all to willing to buy a pig in a poke (screw you, Donny Trump; quoting Mussolini and not rejected the support of white separatists were the most honest things you’ve done since Hector was a pup) rapidly created a nice black market for hoverboards. They still do not hover. They still burst into flames. And they’re still selling like hotcakes – particularly now that they are sold tax-free.

Then again, so are Donny Trump piñatas.

Last Sunday’s Academy Awards broadcast was the lowest-rated in eight years. According the the early demographics, this is because of a significant drop in white viewers. Hello? Is that because all of a sudden a lotta white people decided they no longer like Chris Rock? Maybe. Is that because they’re tired of hearing about dealing with racism?

Our popular culture has grown somewhat reckless. It’s as if, as a nation, we’ve grown fed up with giving a shit. Overload, perhaps, and maybe that’s understandable. Not supportable, but understandable.

As ComicMix columnist Joe Corallo has pointed out many times, Marvel Comics has retreated somewhat from its commitment to diversity in characterization. What makes this all the more regretful is that Marvel has pretty much led the way in opening opportunities up to a much more diverse range of creators. Go know. DC’s response to our changing times is to hit the reboot button once again, like a monkey in a crack experiment.

Here’s a fact of life that people who try to sell you shit don’t want to know, and this includes manufacturers, politicians, and comic book publishers alike: we “consumers” (I loathe that term; I shall not be defined by what and how much I buy) control the markets. All of them. If we do not like a product, if we think it’s not safe, if we decline to vote for imbecilic megalomaniacs, if we shift our attention from the umpteenth painting of lipstick on a pig towards honest efforts from dedicated storytellers… then all that crap will go away. Ford couldn’t sell Edsels so they stopped making them.

That’s how capitalism works. Let’s use it to our advantage. Let’s not support crap.