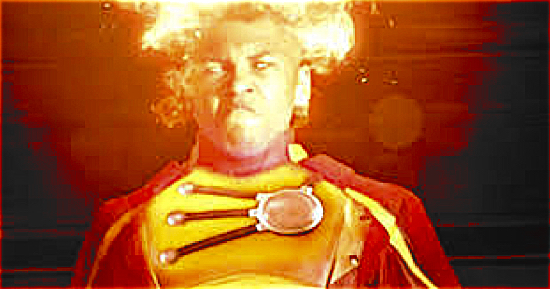 Just as my ComicMix cohort, the Legend of Yesterday, Today, and Tomorrow Denny O’Neil, I have jumped gently back into the TV fracas again with DC’s Legends of Tomorrow. Denny was quick to note in the macro that the show harkens to a very base pulp root – that of myth of the voyage. But my gaze is far more acutely focused on but a single moment from the first episode of the CW’s titular team up.

Shortly after The Doctor – um, I mean Rip Hunter – has pitched woo to each of his would-be Legends, we’re treated to the monotony of joining each member as they pack up their lives to go adventuring. With seemingly everyone on board, we assume smooth sailing… until we reach the immaculate home of Professor Martin Stein. There, amidst his country bumpkin bric-a-brac, Stein and his young ward (Jax Jackson, because all other actual comic-approved merger-buddies are not living…) minced mean words. You see Mr. Jackson, with his youth and a future in tact, wasn’t as elated to traipse across time and space with a band of would-be time cops. Stein frankly couldn’t care less.

And that my friends, is where the show jumped the King Shark.

The known pacifist who was shown previously to prioritize his love of his wife above all else felt it OK to drug his would-be co-hero and drag his sleepy ass onto the ersatz-Tardis because he wanted to. This of course led to Jax waking up, getting angry, eventually getting into plot-driven danger, and ultimately seeing Stein’s way of thinking. It helps that he’s only as smart as the story requires him to be. So a little metaphorical football teamwork was all it took for Jax to forgive and forget. The show of course is in its infancy and perhaps I’m being needlessly picky. But I digress, you see. Being needlessly picky is sort of my super power.

Up until this point, I’ve kept a keen eye on Firestorm in the the DC-CW-TV-U. Amidst all the typical TV dramady tropes revolving around love, revenge, justice, love, romance, kissing, punching, and love, Firestorm has been a calming presence once his origin was ironed out. Stein is as he was in the comics – level-headed, intelligent, and wiser then his would-be counterparts. It’s really the whole hook of the character when you think on it. By pairing the super scientist with jocks and jackanapes the character becomes an inner-monologue of arguments while all the action happens on panel. And as we catch up with Firestorm on Legends of Tomorrow, it’s as close to a comic book scene that reintroduces us to the pair: Jax pilots the body, hurling fireballs at the assailants, while Stein barks orders to refrain from igniting any of the precariously placed chemical receptors around the crime scene. When the criminals are captured, and Firestorm de-Firestorms, Stein and Jackson bicker boisterously as they should.

This brings me back to that pivotal moment when Stein chooses to drug his partner instead of discuss his position. As written, acted, and presented in the episode we’re meant to giggle at the folly of it all. Stein is playing against type to become the impulsive member of the Firestorm Matrix. And to a point, I get it. As a professor and an intellect, the opportunity to travel through time is impossibly tempting. Clearly. But in the year or two that Martin Stein has been one half of a living nuclear reactor it’s hard to believe that he’s not already knee-deep in other research and development revolving around his powers. I mean, as depicted on the show, Firestorm is capable only of flying and fireballing things. To not get us to the transmutation of matter would be a true disservice to the character. Powers aside though, it’s the missing of a man’s soul that troubles me more.

After Ronnie Raymond and Martin Stein officially were able to inhabit their own bodies after their season-long amnesia-riddled origin, Stein offered up what I’d considered to be one of the most realistic lines ever uttered on The Flash:

“If living the last fourteen months as a conjoined meta-human has taught me anything, is that my life’s work should have been being the best husband I could to my wife.”