Mindy Newell is Just Ramblin’ On 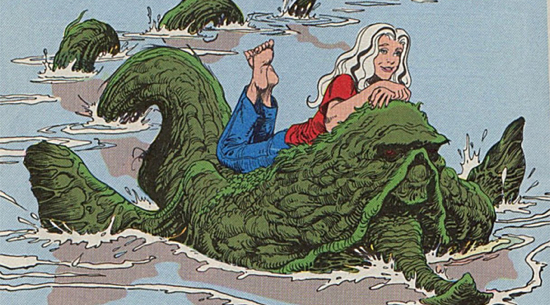 Sometimes a writer can sit in front of the computer screen for hours, fingers poised on the keyboard, and – nothing happens. Not a word, not a syllable. Not a random thought, not a brainstorm. There’s not one single idea that can be expanded upon, not a hint of anything that seems at least remotely interesting.

Did you read Denny’s column last week, the one about the Mighty Marvel Method? This writer came late to that particular game; in fact, I didn’t even know it existed, and the first time I heard the words “Marvel style” – another way to describe the “method” – I didn’t have a clue, though I was familiar with what a “script” was, having read numerous plays, including a whole lotta Shakespeare, in high school and college. I do think that, for novices, the best way to learn how to write a comic is by the “full script” method, which helps (forces?) the writer to understand pacing, hone dialogue, and think visually, because in the full script the writer is describing the artwork in each panel. This can be pretty easy to do in an action scene, but what if it’s basically just two people talking? Then the writer has to think like both a director and a cinematographer, and keep the “camera” moving and the “light” interesting, because otherwise a “talking head” interlude, no matter how important it is to the plot, how crucial to moving the story forward, is just plain b-o-r-i-n-g.

Either way, as in a football game, it’s a team effort. The writer may be the quarterback, but without a trusted receiver – Ben Roethlisberger and Antonio Brown of the Pittsburgh Steelers, Peyton Manning and Demarylius Thomas, Tom Brady and Julian Edelman, Aaron Rodgers and Jordy Nelson, Eli Manning and Odell Beckham, Jr. – he or she won’t reach the playoffs, much less the Super Bowl. I’m thinking Alan Moore and Stephen Bissette on The Saga of the Swamp Thing, Marv Wolfman and George Perez on The New Teen Titans, Frank Miller and David Mazzucheli on Daredevil, our own Denny O’Neil and Neal Adams on Batman. Neil Gaiman and Sam Keith on Sandman. And, of course, Stan Lee and Jack Kirby on Fantastic Four, The Mighty Thor, Captain America, et.al. Of course, these are all classic pairings; YMMV.

Did you read John Ostrander’s column yesterday? John is rightly furious. What’s happened in Flint Michigan is a fucking disgrace. Oh, and one thing John didn’t mention. The fucking Republican Ohio Governor Rick Snyder wouldn’t ask for federal aid or for the President to declare a federal emergency because, you know, Obama’s a Kenyan Socialist Muslim Anti-American Democrat. And he’s black. Thank God for Rachel Maddow, Michael Moore, and the Detroit Free Press. And above all to Dr. Mona Hanna-Attisha, the Flint pediatrician who blew the whistle.

Yesterday I finished semi-binging on The Man in the High Castle on Amazon – semi-binging because I didn’t watch all 10 episodes at once, but divided it up into two “showings” – so I wasn’t aware of the release of the American prisoners from Iran until about 5:30 or 6 p.m. MSNBC and CNN were both covering the story. I turned to FOX, because I was wondering what they were saying about this windfall from Obama’s policy on Iran; no matter what you think about the nuclear deal with that nation – and I’m still on the fence about it – our people have been released. Would Fox, the bastion of fair and balanced reporting” at least celebrate that? Nope. They just kept replaying and replaying the Republican debate from Tuesday night until the other stations turned to other stories. So fucking typical. Meanwhile, the sixth prisoner, Robert Levinson, a retired FBI agent who allegedly was in Iran on a covert CIA mission (according to ABC News) and who disappeared in March 2007 is still missing. I told Mike Gold that I think he’s dead.

By the way, The Man in the High Castle is a brilliant and engrossing adaptation of Philip K. Dick’s novel. I heartily recommend it.