Clips from Dragons: Race to the Edge Season 2 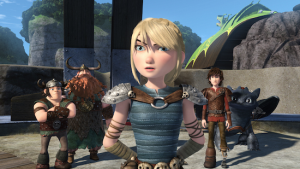 The brand new original series, Dragons: Race to the Edge Season 2 from DreamWorks Animation flies to Netflix Friday, January 8th! Toothless and Hiccup are back in 13 thrilling new episodes featuring familiar characters from How to Train Your Dragon and a new power-hungry villain! This amazing adventure takes place between the stories of the first two How to Train Your Dragon films.

Caption: Ryker’s on the hunt, and he’s closing in on his latest target!  Find out what plans he has for Astrid and Stormfly in an all-new season of DreamWorks Dragons: Race to the Edge on Netflix.

Caption: After a mysterious bite, Tuffnut experiences paranoia and a new ability to speak with Chicken.  Watch Tuffnut unravel in an all-new season of DreamWorks Dragons: Race to the Edge on Netflix.