My first regular comic shop, Kim’s Collectibles, was a cramped little store that shared a cramped little building with a barber. Old men would share war stories in the barber shop, while right next door kids would be flipping through the newest Peter Parker, The Spectacular Spider-Man. The small space got gleefully smaller with the long boxes of comics’ back-issues and bins of vintage vinyl records.

I stumbled across this treasure at the end of the story arc rainbow the day before they opened. And you can bet I made sure I returned the next day to make a purchase. But in 1975, especially in a little town like Auburn, nestled in the Finger Lakes region of New York State, we didn’t really know about comic shops. It would be a long time before being a Geek would be cool and “nerd shows” like the Big Bang Theory were waaaay in the future. But it was a glorious time to be a kid and fanboy.

I had the good fortune to catch up with Kim Draheim, the founder of Kim’s Collectibles (later called Kim’s Comics & Records) and he revealed some astounding things about those early days. 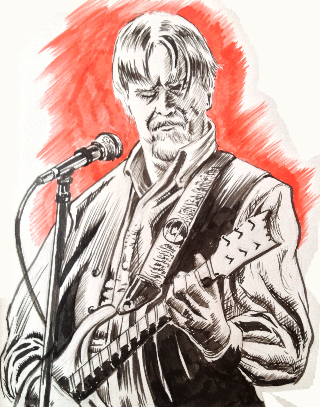 Kim explained that his path to opening a comic shop was not planned. He and his girlfriend were buying their weekly comics from a newsstand, but then decided to make a regular trek to a comic shop in Rochester. The so-called Flour City was way ahead of the curve, with two comic shops already located in that town. And he reminded me that back then, nearby cities like Syracuse had no comic shops. Queen City Bookstore in Buffalo had opened in 1969, but that was long drive from Auburn. New York had a couple of comic shops, but they had yet to catch hold in other major cities, like Boston.

So as Kim and his girlfriend made their weekly pilgrimages to Rochester’s The Fantasy Shop, there came a day when the owner suggested that Kim start his own comic shop. He had never considered it before. But in those early days, long before today’s monopolistic distribution model, The Fantasy Shop sold comics at a near wholesale price to Kim.

Kim knew that low rent would be important, and he found that little hole-in-the-wall in the Five Points section of Auburn, NY. The tiny brick building was owned by the barber, and he provided a separate storefront for Kim’s comic shop.

“Those little hole-in-the-wall comic shops are lost. Now they are they are all big and well lit … and that’s great. But there was a charm to those little comic shops,” Kim reminisced.

The Community and the Comic Shop

Kim recalls how suspicious some parents were of the shop. Some thought he was dealing drugs. He was not. Other parents, and members of the small town, were supportive and would become friends.

One mother didn’t want her son to read comics. The boy was a voracious reader, however, and Kim would see time and time again that “readers read”. So many of his customers read not only comics, but also everything they could get their hands on.

There was an irony where one parent who was quite a drinker would give his son a $10 bill and say, “Go to that weirdo store”. The father would then spend an hour in the nearby bar. His comments probably reflected the mood of many folks in those days, i.e. reading “weirdo” comics was less healthy or productive than spending an afternoon in a bar.

“It’s funny, but I didn’t realize until later when my early customers grew up, how much it meant to them.” And local musicians, the other part of Kim’s Comics and Records, credit Kim for expanding their musical horizons. Several of them still have the first guitar that they purchased through the store.

The Early Days of Comics Distributors

I was curious how the distribution system worked in the early days. At first, Kim’s Collectibles would pick up comics from another store in Rochester. But quickly, he outgrew that system.

“We eventually worked with Capital then switched to Diamond Distributors. We were big enough so we were getting a 50% or 55% discount due to our big volume.” At least it was big volume for those days. “Today we wouldn’t get those discounts.”

In today’s world, where the vast majority of Geek retailing comes from one near-monopolistic distributor, it’s easy to come across complaints. “The one thing I do remember is customer service,” said Kim. When he would call his distributor “…everyone at Capital and Diamond knew comics” and was a fan or collector too.

What Made It Work … and What Didn’t Work

For a brief time, Kim left Auburn and sold the business to one of his best customers, Gary Amadon. Gary ran it for about three years, but the business went downhill without Kim’s passion as a fan of both comics and music. From the start, Kim had blended those two interests together for his retail store. “(Boston’s) Newbury Comics is an extreme example of a retailer who’s done this,” said Kim. To make it work in a small market, he realized he needed to use a blended model to ensure an income stream.

Kim also knew that as a retailer it was important that he didn’t let a fanboy’s collector mentality take over. He related a story about a time where Gary was astounded when a near-mint Amazing Spider-Man #2 was brought in for sale. And soon after, a second near-mint Amazing Spider-Man #2 was also brought in for sale. Gary, as a huge collector, bought both of those comics but couldn’t bear to sell either one. That was a lot of cash for a small store to tie up in non-saleable inventory.

A Return to the Business

Not long after, Kim returned to the Auburn area to start a family. They say you can’t go home again, but he decided to reboot the comic shop. He took it over from Gary.

And so it was time to re-negotiate with his landlord, the barber. Originally, Kim was paying $100 rent each month. That low overhead helped keep the business going. During renegotiations, Kim was concerned when the barber told him that he wouldn’t be able to give him the sweetheart deal any longer. “The price would have to be raised,” he told Kim in a serious manner.

Upon his return to the store, Kim partnered with a super-fan named Thaddeus Foos. Thad had a great talent for grading comics, and together they took great pride that they never gouged collectors and always sold back issue comics at a fair price. They worked hard to ensure that nobody ever felt ripped off.

“I’ll tell you my greatest regret”, Kim confided. “It has to do with the astounding quality of superhero movies today. I feel bad that Gary Amadon died young. Gary loved superhero comics ten times as much as I did. He used to dream about quality superhero movies. He used to talk about it constantly.” With great sadness, Kim explained how much a super-fan like Gary Amadon would have enjoyed today’s big screen, and small screen, comic heroes.

It really has come full circle. Kim’s three-year-old granddaughter dons her red cape regularly to watch the new Supergirl show (over and over) with Grandpa.

“Do you still read comics?” I asked.
“Absolutely!” he enthusiastically replied. Even after all this time, Kim’s still into Geek Culture.

Then Kim went on to explain that he drifted away from superhero titles, but his wife loves the superhero movies. Due to equal parts of nostalgia and habit, Kim still reads Conan comics, now published by Dark Horse. Conan was the title that pulled him back into comics, in eight grade, after he had “graduated from them” in fifth grade. He still likes several series such as Dynamite’s The Shadow, Drawn and Quarterly’s Berlin and Image Comics’ Stray Bullets. His favorite of recent years was Vertigo’s Scalped. “I kept waiting for it to jump the shark, but it never did.”
Kim still sells to a select group of fans. “To be honest – even now – when I get my new comics box I’m always excited. Even though I only purchase five to seven comics each month. And I’m always excited to look through Diamond Previews. It’s just a thrill.”