Campbell’s Soup has a winner with their latest campaign: Made for Real, Real Life. In one TV spot, two dads and their son have fun with classic Star Wars dialog as the family dines together. You can watch it here. It’s heartfelt and authentic, and after all those horrible Progresso TV ads, I think we’re all ready for some good soup commercials.

Campbell’s has been getting some flack for showing a family with two dads. That’s troublesome, but they aren’t caving. Good for them. And beyond the same sex couple aspect, I’m also thrilled that Campbell’s is flying its Geek flag high.

I’m encouraged that we’re getting to the point where a family with two same-sex parents is just “a family.” And while it’s not quite as big a deal, it’s still encouraging to me when brands also understand that Geek Culture is everyday culture. So many brands know that now is a great time to authentically engage in a little Geek Culture fun with consumers.

Everyone knows Star Wars, and everyone knows Darth Vader. But does everyone know the signature lines from the movies? I know that Campbell’s couldn’t have used this approach to sell to soup to my mom back when the Star Wars franchise was starting. And we were eating a lot of soup back then too. But today, it makes all the sense in the world. 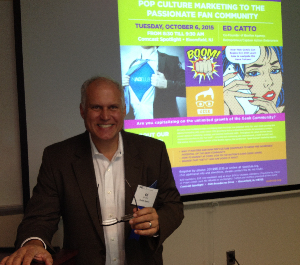 I was invited to be a speaker for the New Jersey Ad Club’s Wake Up Call Seminar Series. Each month, experts on different subjects share information that’s important for marketing professionals to know. And for my presentation, called Pop Culture Marketing to the Passionate Fan Community, the attendees were eager to learn more about Geek Culture.

Recently I saw a comic shop email newsletter that boastfully joked, “We were geek before geek was cool!” That strikes a chord with a lot of what’s going on at conventions, in retail shops, and with brands’ promotional campaigns. And especially during this TV season, with a plethora of new shows based on comics and graphic novels (after a summer of movies based on comics and graphic novels). The marketing community is essentially saying, “Wait, wait, we need to understand this better. This is important to our consumers so it’s important to us.”

No one wants to be late to a party. Besides, it’s all so fun.  Like so many geeks, I’m often the go-to guy for new fans as they begin to engage. For example, one suburban neighbor texts me Batman questions during Fox’s Gotham TV Show, my wife enjoys iZombie as appointment viewing, and a third neighbor just asked for tips about attending New York Comic Con. Geek Culture is a vibrant thread in the fabric of everyday life.