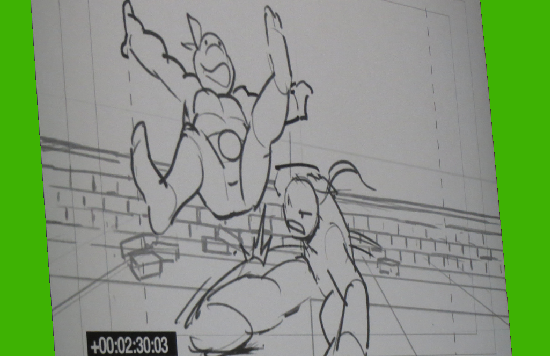 So if you haven’t noticed, the Thursday of New York Comic Con has kiiiiiind of turned into “Turtles Day” for me, in the sense that Nickelodeon does their press and events for the current animated Teenage Mutant Ninja Turtles show on that Thursday, and since I love Turtles and the current show, that’s where I’m at each year for whatever they offer.

This year, that means I had the pleasure of interviewing Ciro Nieli (Executive Producer/Director), Brandon Auman (Executive Producer/Head Writer), Hoon Lee (voice of Master Splinter), Rob Paulsen (voice of Donatello), and Greg Cipes (voice of Michelangelo) about the show. They dished about everything from the upcoming season to whether Raph and Mona Lisa are really going to maybe have babies in, like, Season 6 or something (heh). I also got to go to the rockin’ Turtles panel (in which cast and crew geeked out as much as we did when they realized their nameplates for the panel were made out of Megabloks and had TMNT character toys on them), and got to get a great Season 4 poster signed by the guys afterwards. And along with the aforementioned folks I interviewed, the panel also included Seth Green (Leonardo) and Eric Bauza (Tiger Claw), so we got to hear what they had to say as well, which was pretty cool! Not to mention there were lots of fun moments, such as when Eric Bauza gave Rob Paulsen a “gift” onstage (heh), or when Greg Cipes got Sean Astin to say hi to all of us live on his phone (since Sean was running a marathon and couldn’t be in New York).

As you may know if you have been keeping up on the show, (Spoilers Ahead!), big changes have come to the Turtles world in the now-wrapped Season 3. Namely, Earth and everyone on it, except for the four Turtles, April, and Casey Jones, are gone. As Season 4 opens, the remaining adventurers are now zipping around space with an android named Fugitoid. (Who just happens to be voiced by David Tennant, who just happens to know a little bit about shows involving time travel, so, you know, maybe we’ll get the Earth baaaack? But in the meantime…)

I was a little skeptical about how Turtles in Space might go in the show going into Thursday; but after hearing what’s in store for the season during the interviews, and getting to see the Season 4 premiere episode, I’m totally on board. The first episode, in particular, was really fun: action-packed, with the excellent humor I’ve come to love, but also able to fit the setup for the season and the introduction of a vastly varied and fascinating new planet setting comfortably into one episode. Since the Turtles are apparently going to be bouncing around to all sorts of new planets during this season, that’s very promising.

The panel also revealed some new characters and voices that we’ll be seeing this season, including a race of “Salamandarians” which will include the character Sal Commander; Mona Lisa; the genie Wyrm; and a familiar 1987-style Krang (voiced by Pat Fraley). Other callbacks to the 1987 show include a “transdimentional” episode I’m totally psyched for, in which the 2012 show turtles encounter their 1987 counterparts in the 1987-style animated world, a CG world, and possibly a Mirage comic as well. We got to see a little clip of that work in progress, which was pretty rad; and learned that the original Turtles will be voiced by the original cast! I bet that was a trippy recording session for Rob Paulsen; but the bit we heard sounded great.

If you want to know more about what’s in store in Turtle-land, check out the interviews I did with Ciro Nieli and Rob Paulsen and with Greg Cipes, Hoon Lee, and Brandon Auman. And if you want to see some great pics from the panel, check out my NYCC 2015 photo album.

Enjoy! And until next time: Turtle Power! Booyakabunga! And Servo Lectio!