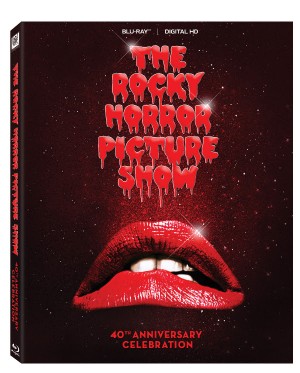 It goes without saying that the 1970s cannot be recounted without examining certain cultural phenomena. The Godfather and star Wars certainly helped redefine filmmaking and both had major impact on pop culture. But then there was the growth of cult cinema, which endures to this day, and was sparked by the arrival of a 20th Century Fox flop, a failed adaptation of a British stage play that gained some cred when it moved to Los Angeles. Little did anyone suspect that when New York’s Waverly theater began screening The Rocky Horror Picture Show at midnight, it would engage a generation.

I had heard of it soon after the screenings began but didn’t see it for the first time until my college roommate showed it in our dorm room so I could see and hear it for myself before it screened on campus with complete audience participation. I was taught which lines to repeat, when to throw toast, and the rest.

Thanks to home video, the film’s popularity has never waned as subsequent generations have discovered it and made it a part of their experience. So, here we are marking its anniversary with The Rocky Horror Picture Show 40-th Anniversary Celebration. 20th Century Home Entertainment has released it in a variety of formats but even its most basic single-disc Blu-ray edition is packed with wonderful stuff.

Richard O’Brien never expected his twisted homage to science fiction films would ever grow beyond the Royal Court Theater. Working with director Jim Sharman, they were clearly in sync and having fun. Anchored n stage by Tim Curry, the show gained a nice following, crossing the ocean to play at the Roxy Theater where core members of the film cast assembled, It was so enthusiastically received that a bidding war for film rights erupted.

The movie was shot cheaply and quickly, as befit its story, and opened in England on August 14, 1975 and at the UA Westwood in Los Angeles on September 26. Mainstream audiences and their critics didn’t get it. More, they didn’t like it and it was quickly yanked from its limited release. The Waverly began their screenings April 1, 1976 and finally, it found its intended audience.

In the current Entertainment Weekly, Curry (Dr. Frank N. Furter), Patricia Quinn (Magenta), Meat Loaf (Eddie), Barry Bostwick, and Susan Sarandon were reunited and in their reminiscences you got a sense of the organized chaos surrounding the production. It probably helped that Bostwick and Sarandon were new to the production, as were their characters Brad and Janet.

The story doesn’t always make sense but boy, does it look sharp and have a great soundtrack. The performances were spot on, with tongue just firmly enough in cheek so they got the joke and shared it with the audience. The combination of Sci-fi tropes, rock score, and amazing visuals helps keep it entertaining on repeat viewings. The high definition edition is crisp, matched with a strong audio track.

The single Blu-ray disc offers the film in in its USA and UK release versions along with Audio Commentary by O’Brien and Quinn. Most of the special features are repurposed from previous editions but is nice to have them here. Many of these can also be downloaded to your computer. These include: