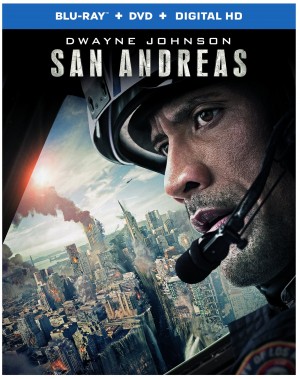 We haven’t had a good old fashioned disaster movie in ages. The timing for San Andreas is interesting in that most Californians have stopped worrying about the big earthquake, focusing instead on the drought and/or the wildfires. But the seismologists have never stopped fretting that a quake, more devastating than the 1906 San Francisco event, is imminent. After several decades of “imminent” waiting, I can see how attention has wandered.

The Dwayne Johnson-led action film is a brutal reminder of just how much devastation is likely to result from such an earthquake. With CGI effects to enhance the imagery, this is a visual feast of destruction. And like every good epic in this genre, we follow the impossible efforts of one man not only to survive but to rescue his family despite the odds. As a result, the horrific reality is undercut by the muscular heroics. We know they’re going to nearly die but survive, the nuclear family intact, as San Francisco vanishes around them.

The movie, out now on Blu-ray from Warner Home Entertainment, is exciting and entertaining despite stretching credulity, As with so many of this films, the scenes of death and destruction are sometimes hard to watch and always prolonged beyond necessity. Whereas you could get to know the cast aboard the vessel trying to land in Airport or survive The Towering Inferno, the editing is much faster so it changes the pacing and tempo and you can get lost in the debris.

The story begins with the scientists at Cal Tech, led by Lawrence Hayes (Paul Giamatti). They believe they have perfected predicting quakes so of course, their equipment is immediately tested with the Bog One, which is bigger than most worst case scenarios imagine. We watch as Hoover Dam and Los Angeles get smashed as the wave heads north up the San Andreas Fault line.

Enter rescue helicopter pilot Ray Gaines (Johnson), abandoning his daughter Blake (Alexandra Daddario), to do his duty around Los Angeles. She accompanies her soon-to-be stepfather Daniel (Ioan Gruffudd) and her mother Emma (Carla Gugino) into and out of danger until dad has come to the rescue. They wind up being accompanied by Daniel’s sister Susan (Kylie Minogue) and things continue to move at a breathless clip.

You root for everyman Johnson to save the day time and again, because that’s all these movies want you to do. There’s no room for discussions over safety inadequacies or the general nature of human behavior. Instead, our core characters stand in for mankind and we munch our popcorn, hoping they survive without too much trouble.

Director Brad Peyton (Journey 2) keeps things moving along, sometimes too quickly, but rarely taking his eye off the family that gives the film a heart more recent efforts like 2112 skipped. We’re left reassured we will survive and rebuild.

The high definition transfer is excellent at 1080p, 2.40:1 so every bit of concrete and steel, every drop of water, and every fleck of blood is sharp. The Dolby TrueHD 7.1 lossless soundtrack is a peerless match the visuals making this one satisfying home viewing experience.

There are only a few special features included, which is surprising given the scope of the project. The Audio Commentary from Peyton offers up many a nugget of interesting information about the filmmaking process. Then there are some relatively short pieces starting with San Andreas: The Real Fault Line (6:23), as cast and crew recall shooting specific moments; Dwayne Johnson to the Rescue (9:24), as the star recounts making the film’s opening and closing sequences;  Scoring the Quake (6:13), with Composer Andrew Lockington; Deleted Scenes (4:40), a collection of eight scenes, with option commentary from Payton; a Gag Reel (1:22); and, a Stunt Reel (2:56).