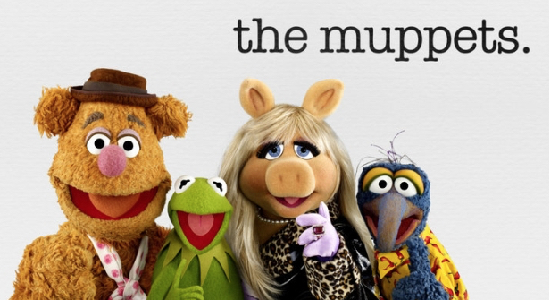 New York Comic Con is this week, which means I have way too much to do and so not enough time to do it. Let’s be honest, I am so behind in my planning, I’ve decided to ignore it all, veg out and watch TV. So, I’m relaxing with The Muppets.

Have you watched the new Muppets TV show yet? It’s a fun diversion, especially with prep work looming overhead. Now, I am too young to have watched the first series, but I remember watching the reruns as a kid. This brings me back to those happy memories and feelings, mostly because I am still a kid.

The current series has been billed as The Muppets for grown-ups documentary style series, similar to The Office. We watch the whole Muppet family work together on Miss Piggy’s late night show. All the old favorites are there, plus a few of the lesser known characters get featured along with some new additions to the team. You have Electric Mayhem as the show’s band, Fozzie as the announcer, Kermit as the producer, and Statler & Waldorf as permanent audience members, but not in their skybox.

In this, we see another side of the Muppets. Yes, we still get some musical numbers and some physical comedy, we also get relationship jokes and workplace drama. (Animal is apparently a player. Who knew?) The show still has a ton of guest stars but they have meatier storylines and appearances in each episode.

In case you haven’t seen the news, there are family groups complaining about the kid-friendly characters being shown in a grownup environment. While the premise is not exactly kid-friendly, the show can be. Most of the “adult” jokes are delivered in a way that most kids would miss them. Like every really good kids movie, some jokes are only meant for the parents. If anything, I think most kids would find those storylines boring.

Check it out if you get a chance. Let your inner child and your outer adult both enjoy what The Muppets have to offer.