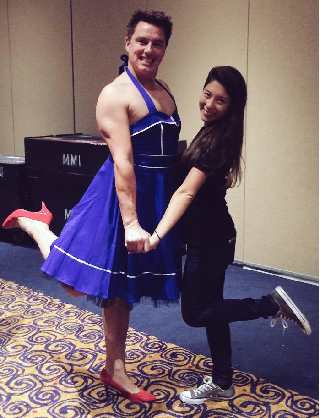 As you read these words, my Unshaven brethren and I will be in “Cincinnati” for CincyComiCon – Tony Moore’s comic book convention that takes place in the Northern Kentucky Convention Center (which is, funny enough, not in Cincinnati proper). A week ago we were in Atlanta for the famed Dragon Con. The show itself had been promoted to us as “A license to make money,” “Nerd Mardi Gras,” and “The biggest and best fan-run comic convention in the nation.” We were told the absolute truth.

Dragon Con exists not in a behemoth convention center but a gaggle of interconnected hotels and venues in downtown Atlanta. Each building either hosts a litany of programming or contains an artist alley, an art show, a celebrity row, or dealer’s room. Anyone within a square mile of any of these venues is likely to get the feeling that the entire city itself has been usurped wholly by the geek world at large. This fact was compounded to me personally when upon entering the hotel that housed the Artist Alley the night before the show actually started, we had to cut through what could only be described as a cosplay raver that choked the Hyatt Regency’s lobby to the rafters with costumed partiers, and their menagerie of fans and onlookers. Nerd Mardi Gras indeed.

From Unshaven Comics’ perspective, the show felt far more like an intimate Anime show than the MegaCons that are C2E2, New York Comic Con, or any of the Wizard Cons. Because the alley itself was housed in a single ballroom (split, in-fact, with a fantasy fine-art show), everything felt small. This in and of itself turned out to be a boon for our business.

The reason, as best as I could ascertain, was due entirely to the fans themselves. Unlike the cold and lifeless MegaCons whose corporate masters anchor their shows on exhibitors and celebrity guests, Dragon Con is clearly a fan-driven affair first and foremost. The staples of the con circuit – the aforementioned celebs and exhibitors, the artists, small publishers, and vendors – are secondary to the programming and atmosphere. Furthermore, the Alley itself was juried, built to ensure that amidst some well-recognized names there was an emphasis on showcasing that which was new and off-the-beaten-path.

Because each bit of Dragon con existed in its own ecosystem, there was no fighting for a fan’s attention. Unshaven Comics is used to competing with marked-down maquettes, bins of bootlegs, the appeal of autographs, and the untz-untz throb of expensive exhibitor booths. In lieu of that, our particular Alley was served up as an experience unto itself. Within our handful of aisles were the skilled craftspeople – artists alone selling their crafts, prints, canvases, and comic books. And with that atmosphere cultivated without the aforementioned competition, the fans came without any larger agenda beyond appreciating the specificity of the Alley. That appreciation bore the sweetest fruit an indie table could dine on… great sales.

To get analytical about it, by the end of four solid days of shilling we limped out of Atlanta 600 books lighter. For those playing along at home, that’s better than our first year showing at NYCC. Our closing rate has never been this high, peaking at 60% on Saturday and Sunday. We also had the largest rate of return purchasers; fantastic fans willing to pick up the first issue in our Samurnauts series early in the show, and make their way back to us to scoop up any other issues on our rack. In addition, both Matt (Wright, Unshaven artist extraordinaire) and myself saw a plethora of commission requests. This required us to bring home homework every night, in order to satisfy the masses. Forget Sid Caesar, kiddos. This was the Show of Shows.

As we took to the 12-hour car trip home, it became evident to us that Dragon Con was not a convention. Truly, it was a celebration. Beyond the curtained walls of our show-space, we’d later find out there were over 30 tracks of programming to peruse. There was a literal parade for Cosplayers. There were 4 unending nights of after-parties. We were left baffled in the wake of it all. That feeling of a larger company perched on high-tented fingers over a pile of reports and stacks of cash was nowhere to be found. Instead, there were passionate promoters trying to put together a cacophony of fan-driven fun. They did it in style. They did it in epic fashion. And they did it in a manner that served up that mass of fandom to our little table, with an open wallet, and an ear-to-ear smile.

Smaug be damned… Dragon Con decimated my idea of what a comic con could be.