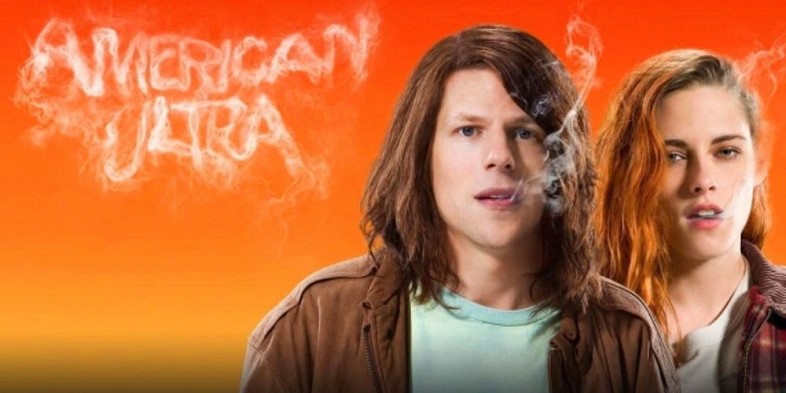 American Ultra would have been the coolest movie in the world in 1996. It has the lovable loser slacker protagonist with a quirky hobby and a mundane job, it has plenty of sudden graphic violence, and it even has a plot that’s a metaphor for parental issues.

Unfortunately, the last 19 years haven’t been particularly kind to these tropes, and this movie that would have easily swept the Independent Spirit Awards two decades ago instead feels less special and more tired. It doesn’t sink the movie, it’s still frequently a blast and features one of the most best ensemble supporting cast I may have ever seen but this is a movie that in another era could have been a home run and it’s disappointing to see it just be a long double.

While not a fantastic reflection on the originality of the film, American Ultra lends itself very handily to mash-up comparisons. It’s Chasing Amy meets A History of Violence, it’s Slackers crossed with The Bourne Identity, it’s SubUrbia having a baby with The Transporter. Mike Howell (Jesse Eisenberg) is a stoner convenience store clerk who draws an ambitious if nonsensical comic book in his spare time. Unbeknownst to Mike he is an old CIA asset that due to a power struggle within the agency has been targeted for termination. When the CIA assassins come to kill him Mike discovers he’s an amazing killer. The ensuing chaotic escalation of this operation ends up bringing everyone in Mike’s life in to the orbit of this violent struggle especially his girlfriend Phoebe (Kristen Stewart) who is the cliché suspiciously-attractive girlfriend of a total loser. There are enough clever twists and fun tweaks to the formula here to make the film exciting but maybe they go a little too far as there are all these vestigial bits of plot hanging off the edges like threads that they forgot to weave in to the main fabric of the story.

While both Eisenberg and Stewart are quite good— in fact, both seem to be trying very hard to shake of the notion that they are budget-friendly versions of bigger stars— the real winning performances in American Ultra come from the supporting cast. Topher Grace chews scenery hard as the smarmy evil CIA supervisor and I’ve seen him do this douchebag performance so well so many times I’m beginning to wonder if he’s not like that in real life and that’s probably the mark of an exceptional performance (or an exceptional jerk in real life, but I hope not). Connie Britton usually acting across from Grace does a great job bringing a grounded energy to those scenes, but when she’s doing scenes with any other characters she switches gears and becomes the scene stealing performer we know she is. Walton Goggins is a terrifying presence as the CIA lunatic killer Laugher turning in a performance that is 100% chilling nightmare fodder. The cast is so embarrassingly deep that Tony Hale and John Leguizamo, both national treasures and utter delights in this film, feel criminally underused but there just isn’t room for more of them.

By the time I’m writing this it’s pretty apparent American Ultra didn’t find its audience. We’ve even gotten the 2015 signature move of the underperforming movie and someone involved in the production has taken to Twitter to complain about the results of their labors. It’s a shame, this movie deserves better and I hope that eventually people discover this movie on Netflix or wherever because it deserves to be seen and to be appreciated. Not because it’s screamingly original or clever but because it’s an example of exceptional execution and the good work a solid cast can do to carry a middling script. American Ultra is a film that deserves better than it got from America this weekend and better than it got from whoever came up with this terrible non-descriptive title.