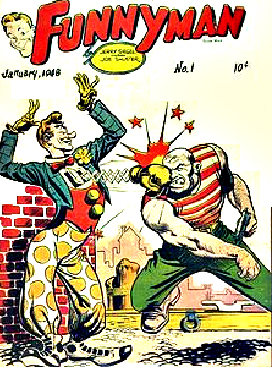 Imagine the nipper that was me 70 years ago, give or take, I’m just back from one of my irregular expeditions up and down Claxton Avenue, stopping at certain houses and trading comic books with the kids who lived in them.

(I no longer have any idea who these kids were – though Dard Schmidt may have been one of them – but I hereby tender to them much belated thanks.)

Anyway, I’m looking through the newly acquired comics and … what’s this?

A comic book about a guy dressed like a clown who calls himself Funnyman and fights criminals. Not exactly like Batman and Superman fight them, but I guess fighting criminals is fighting criminals and anyone who does that is a good guy and so let’s just open the cover and see what this Funnyman is doing these days,

I must have liked what I saw – after all, I did remember the character longer than your daddy’s been alive, despite having only one encounter with him (I think.)

I mentioned Superman, didn’t I? Well, back then, in post-war St. Louis, I doubt that I really understood what bylines were. Reading itself was a recently acquired skill. Fact is, I don’t know if Funnyman had bylines, but if it did, they would have featured the names Jerry Siegel and Joe Shuster.

Ringing any bells? Yep, that Siegel and Shuster, the creators of Superman. It seems that Jerry and Joe were in a legal hassle with their former employer, the publisher of Superman, and decided to try something new, something without a big red S on its chest.

Enter Vin Sullivan. Mr. Sullivan, who seems to be one of comics’ forgotten men, had worked with Jerry and Joe on the early Superman and had started his own publishing company, Magazine Enterprises. Mr. Sullivan gave Jerry and Joe’s latest creation his own comic and Funnyman was heading for glory. But not for long. The title lasted only six issues. Siegel and Shuster also tried Funnyman as a newspaper strip, and that did not fare well, either.

But might the character be revivable? Maybe hype up his alter ego, a comedian named Larry Davis, and borrow some tropes from the trickster myths and … Oh wait! I’ve got it! We’ll have him run for governor – no, not governor, let’s go big time…we’ll have him campaign for the presidency (of the United States) and he says that he will eliminate most of the country’s problems during his first week in office by firing all the stupid people. Then comes the mightiest plank in his platform: He will deal with crime by building this great big wall … did I say “great big?” I meant huge – HUGE! A trillion feet high! And really, really long. And then, he’ll put all of the bad criminals on one side of the huge wall and never, ever let them back into the country even if they ask very politely.

One more thing: let’s give Larry Davis his own television show. What do you think – Sunday nights on NBC?