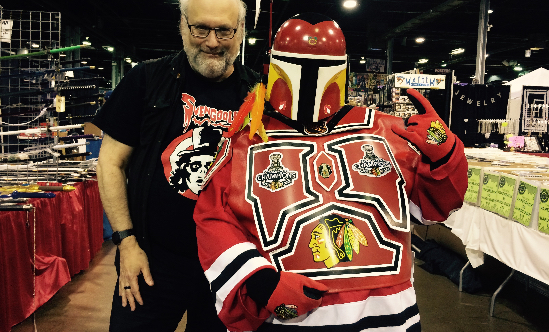 Last week, I reported in this space I was about to leave for Wizard World – Chicago, well-known to readers as my home town and the first love of my life. I got back late yesterday, when I wrote (or will write, depending upon your concept of consensual reality) these fabled words, a heartbeat before deadline.

We ComicMixers (Glenn, Brandy, Marc and me) had a swell time, some of it actually at the convention. We met all kinds of people who were interested in ComicMix Pro Services, which gives me hope, and I got a chance to catch up with a whole lot of friends. Unbelievably awesome meals with; Wednesday, Alex Ross, Hilary Barta, Monte Beauchamp and Jim Wiznewski; Thursday, Dean Haspiel, Danny Fingeroth, J.J. Sedelmaier and Rivet Radio’s Charlie Meyerson; Friday, Ty Templeton and KT Smith; Saturday, if I told you I’d have to kill you; Sunday, The Unshavens. Nothing makes me happier with my clothes on than fine conversation, and I was truly lucky to break bread with all these folks. Including the people I can’t tell you about. Yet.

I was on two panels – a ComicMix Pro Services Tells You How To Get Press For Your Comic Book panel where we got to meet even more talented indy writers and artists, and the Chicago Comics History Panel with Danny and J.J., Larry Charet, Ron Massingill, and the completely wonderful Maggie Thompson. It dawned on me that I’ve been going to conventions since 1968 and Maggie has been going to them… well, longer, but this is the first time we were on a panel together. That simply defies the odds. I’d crawl over a mile of broken glass to do a panel with Maggie.

That latter panel provided the opportunity to do a nice and extremely well-deserved tribute to my former partner, First Comics Co-Creator Rick Obadiah. That was very cathartic, and Rick would have enjoyed it. He wouldn’t have believed it, but he would have enjoyed it nonetheless.

I haven’t done too many shows this year, far fewer than usual. That was fine, but it was great to see fans and old friends and about twelve thousand cosplayers dressed as Deadpool. Next show: the Baltimore Comic-Con, in Baltimore (hey, Wizard World – Chicago was in Rosemont) September 25 through 27. I love that show.

One more thing. Shortly before Wizard World closed on Sunday, I was handed the opportunity to take the above picture with Boba Hawk. As a lifetime Chicago Blackhawks fan, that was… well, you can see for yourself in the photo. No, Svengoolie wasn’t there, but I wore his t-shirt anyway. It glows in the dark, and at a comics convention, one can never tell.