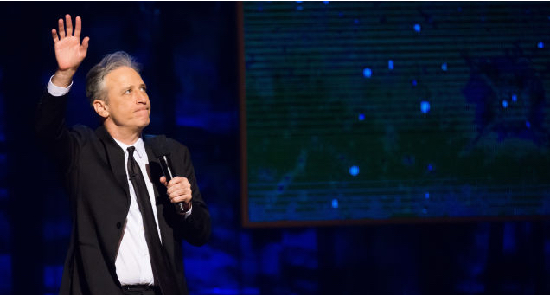 It was a good show.

Jon Stewart ended his run on The Daily Show last week with an hour-plus long installment. It was a good episode and a good final episode. I’ve seen a few of these things – where a long time reporter or entertainer walks away, of their own volition, from their show. I saw Jack Paar (you kiddies go ahead and Google him or look him up on the Wikipedia) leave his weekly show, walking out through a series of spotlights cast on the floor. I saw beloved newscaster Walter Cronkite sign-off for the last time, telling us, “I’ll be away on assignment, and Dan Rather will be sitting in here for the next few years. Good night.” I saw Johnny Carson, the King of Late Night Television, leave The Tonight Show with his “very heartfelt good night.”

These kind of shows can be difficult to pull off. The episode can be too much, it can be too little, it can be awkward – as parodied brilliantly by Gary Shandling on The Larry Sanders Show. I thought Letterman’s exit from The Late Show was a little flat and Stephen Colbert’s exit from The Colbert Report somewhat over the top, even for him.

Stewart’s final show was entertaining, funny, surprising in places, and human. Basically, it was a very good episode of The Daily Show with Jon Stewart. There were the tropes you expected and wanted to see such as the former “correspondents” coming back for one last gag, usually at Stewart’s expense. I didn’t even know who some of them were, that’s how far back it went.

One of the surprising sequences was the taped appearances of some of the folks Stewart has pilloried over the years, climaxing with Sen. John McCain’s “So long, jackass.” That sounded heartfelt to me. If you’re Jon Stewart and you’ve pissed off these people (and scores more) you’ve done your job.

What was both somewhat surprising and very human was Stewart’s final take to “Camera Three” where he used to give advice to some person or group. This last time it was to us, talking about “bullshit.” Basically, he was telling us how to pick up the slack once he left. His advice boiled down to: “If you smell something, say something.” That’s what he’d been doing, and doing well, during his tenure on The Daily Show. That’s what he was urging us to do.

The show wound up with Bruce Springsteen and the E Street Band performing two songs live in the studio. The second was “Born To Run.” It was both a surprise and fitting – one New Jersey icon saluting another.

And then it was done.

I’m really going to miss Jon Stewart. Yes, his opinions mostly coincide with mine, although not on pizza. His denigration of Chicago-style pizza was a rare blot on his record. I know others prefer Steven Colbert or Bill Maher or John Oliver but Stewart made me laugh more, made me smile more, made me share his anger together at worthy targets. He was intelligent, witty, insightful and he wasn‘t afraid to make fun of himself as well as others. According to tributes I’ve read of him, he was generous to other talents, dedicated, and hard working.

In the end, he was tired. Why else would he leave with the 2016 elections coming up and the GOP offering up so many nice juicy easy-to-hit targets? He left while he was still on his game and I salute him for that.

I expect that, at some point, Jon Stewart will walk out on the public stage again. However, when Johnny Carson retired he said he would return in some format some day. He never did. I worry that Jon Stewart might do the same thing.

I’m sure the heir apparent to the Daily Show hot-seat, Trevor Noah, will do a fine job and I intend to tune in. He won’t replace Stewart; it’ll simply be a new show, Noah’s version of it. That’s how it should be. But he won’t be Stewart. Jon Stewart, over the years, became a friend, one who was articulate and funny and not afraid. You never have so many friends that you can afford to lose even one.

Damn, but I’m going to miss you, Jon Stewart.