Would you Believe Get Smart is Turning 50? 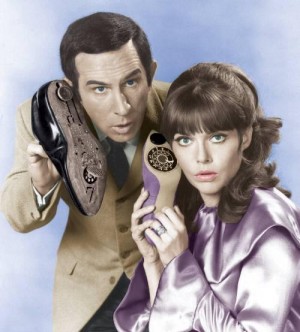 New York, N.Y., July 23, 2015 – When it originally debuted in September of 1965, Get Smart, the multiple Emmy®winning classic spy-spoof comedy series from comic geniuses Mel Brooks and Buck Henry, generated countless catchphrases like “Would you believe?” and “Missed it by that much.” This fall, to mark the 50th anniversary of the legendary series, HBO Home Entertainment® is bringing those catchphrases to a new generation when all five seasons of Get Smart are made available for digital download for the very first time. With the digital release, longtime fans will have a chance to watch the series in an exciting new format, while new fans will be introduced to the antics of Maxwell Smart for the first time.  Get Smart will be available as a digital download August 10, 2015 across all major retailers. Suggested retail price is $1.99 for each SD episode and $19.99 for each SD season.

“You lucky dogs. You’re gonna get to see Don Adams talking on his shoe telephone and watch the unbelievable antics of Maxwell Smart and The Chief trying to hear each other under The Cone of Silence,” said Mel Brooks. “Can’t wait to see it myself!”

Full of bumbling spies, gadgets and gags, Get Smart features the beloved characters Maxwell Smart/Agent 86 (Don Adams), Agent 99 (Barbara Feldon), and the Chief (Edward Platt) – members of a top secret U.S. government agency called CONTROL, who battle the forces of their nemesis KAOS, an equally inept foreign spy agency. The series was ahead of its time in the way that it created a vast, complicated mythology and mastered the art of self-referential comedy to reward its loyal audience for tuning in week after week. The series originally debuted on NBC in 1965 and enjoyed popularity and a cult following before moving to CBS for its final season. Since ending, it has inspired numerous spinoffs, sequels and remakes, including a 2008 summer box office hit starring Steve Carell and Anne Hathaway.