REVIEW: X-Men: Days of Future Past: The Rogue Cut 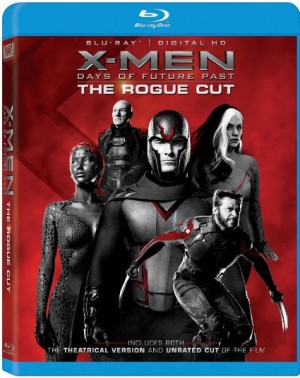 What interesting timing that after an Avengers spring, the summer suddenly is about the mutants. The current Entertainment Weekly previous next summer’s Apocalypse film and we also get to revisit the previous installment.

Last year’s X-Men: Days of Future Past has been pretty much accepted as the best of the five X-Men movies from 20th Century-Fox. After all, Bryan Singer did a great job on the first two and used the fourth to wipe the bad taste of Brett Ratner’s effort from memory. It blended the casts from the past and present, while still introducing new characters and making us want more. It also faithfully paid homage to the source story from Chris Claremont and John Byrne while remaining true to the cinematic continuity. Not an easy trick to pull off.

One glaring problem was the diminished role for Anna Paquin’s Rogue and we learned in the pre-release hoopla that her storyline was excised for a number of reasons. Then, in the wake of the film’s success, it was revealed a Rogue cut would be offered and now, it has finally arrived.

There are seventeen minutes of new material in the new edition, out now from 20th Century Home Entertainment. The Blu-ray comes with a digital HD code and boasts an additional 90 minutes of extra features.

X-Men: Days of Future Past: The Rogue Cut is interesting to watch but you come away realizing the original edit was probably for the best. Not that there’s much wrong with the Rogue scenes, but it does lengthen the film and bogs down some of the pacing. We get to see her here and there early on but she really doesn’t take her proper place with the team until the final act.

20th nicely includes both versions of the film so you may decide for yourself. You will admire some of the extra character bits for Bishop and Blink in the extended versions of their scenes and that’s welcome. And as we saw in the deleted scenes from the first version’s DVD release, there’s more Mystique stuff that better sets up her change of heart towards the end.

As for the Rogue material, last year I complained Ellen Page’s Kitty Pryde had little to do and here she has less and Rogue taps her power to give her a break. Unfortunately, Kitty doesn’t gain extra screen time in the new cut.

There is fresh commentary from Singer which addresses the value of different cuts of the film and his preference for the variety. He’s joined by editor John Ottman, who also offers his thoughts behind the changes between cuts. Additionally, the extended edition has labeled the various chapters as alternate or new scenes so you can find whatever you most want to see. Although, seeing the film all the way through will remind you of how powerful the overall story is.

The AVC encoded 1080p transfer is lovely to watch, with good rich colors and a fine sound mix to match.

Disc one has both films and the original cut’s commentary from Singer and Simon Kinberg is still here. Disc two offers us Mutant vs. Machine (52:41), collecting the featurettes that goes into detail on the making of the film. There’s also X-Men: Unguarded (30:11) as cast and crew have a particularly casual discussion about the property. There are galleries of interesting visual information as well.

If you have the first home video release is the second one needed? It all depends on why you bought the first and how much you want to see the differences between the two. If you have the one, you might not need this one but it’s certainly well worth a look.