Dennis O’Neil: San Diego Comic-Con – The Once and Only? 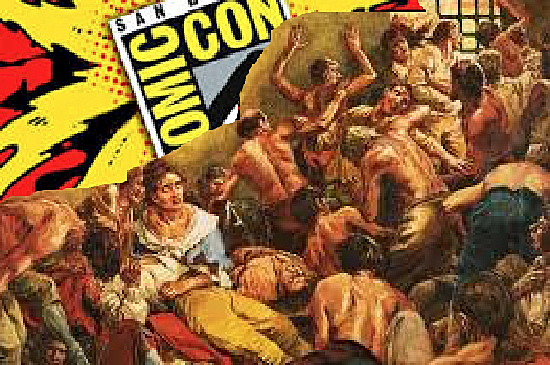 Big sigh of relief, right? It’s history. Again. I wasn’t there, but you were, and your sigh of relief may be mixed with fondness, disappointment, frustration, triumph… maybe plain old-fashioned jet lag. Depends on the kind of con you had. Expectations fulfilled? Thwarted? A little of both?

I refer, of course, to the just concluded San Diego Comic Con. I didn’t attend the 2015 edition, but I’ve gone to the show often in the past, so hey, I know a little of whereof I speak. That guy over in the corner is saying that, matter of fact, he hasn’t attended the con, ever. Okay, try to make it next year. It’s an experience everyone should have –once. Twice? Well, depends on your tolerance for huge crowds, noise, and a vast arena filed with manic energy. For some, this is tonic. For others, maybe not so much. You decide after that first visit.

The con has become, among other things, a gathering of the tribes. You can expect to run into colleagues and fellow enthusiasts from all over and maybe some deals get made, and maybe a romance is kindled, or maybe you’ll just enjoy meeting people you’d forgotten existed, but are glad they do, and surely that’s pleasure enough.

You’ll also have the opportunity to share oxygen with celebrities, if you’ve a mind to, and stand in line to pay them real money in exchange for their autographs. Or you can just attend their events and learn of their latest projects and for some, that is pleasure enough.

Am I forgetting anything?

Oh yeah. Comics. It is a comic con, after all, and there is plenty of comic book action. Old issues for sale, and plenty of comics-related merchandize. (I own a hoodie with a bat symbol emblazoned across the front and another that kind of looks like Dr. Who’s Tardis. Didn’t get ‘em in San Diego, but I did buy them at comic conventions.) And there is a generous number of panels and talks devoted to comics, so if funny books are your joy, buy a ticket and find a seat in the ballroom.

The complaint here might be that the comics activities are eclipsed by the celebrity stuff, and while that’s true, I don’t think it’s worth getting fussy about. As noted in the paragraph perched atop this one, there’s no shortage of comic book material, at San Diego or any of the other cons I’ve attended. That could change, I guess, but for now, the needs of us print lovers – call us fossils if you must – are being met.

When I first became aware of the San Diego show, I had doubts. The city was stuck way at the western end of the country, just a few miles from the Mexican border that has Mr. Trump so fretful, and who’s going to make that trek just for a convention if they live in the east or midwest? This year, the answer… according to published estimates, is 130,000 attendees. A lot. And the success of the affair has helped haul that step-child of publishing, the comic book, up into respectability.

See you next year?