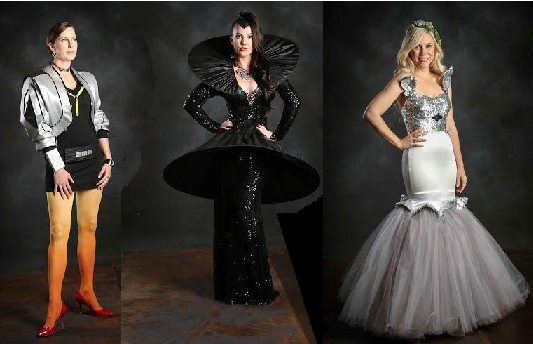 Guess what, faithful readers? It’s time for more San Diego Comic Con coverage! In Part I, I talked about the convention floor, exclusives and swag, cosplay, Artist Alley, and some of the activities that go on around the convention center. Today, the topic is the coolest fashion happening at Comic-Con: The Her Universe Fashion Show, now in its second year.

Anyone who’s read my columns before will know that I’ve been an advocate and supporter for good quality geek-themed women’s fashions and accessories and cosmetics (like Espionage Cosmetics geek nail wraps, Literary Lacquers literary-themed nail polishes, and superheroine-themed perfumes) for years (and if you want some of my recent faves, check out my Pinterest page, dedicated to just those things). So I was super excited to get a front-row seat to the Her Universe Fashion Show this year; and let me tell you, it was a total blast! It was set up like a real runway show – but way more fun because of how into the geek factor everyone was.

If you’re wondering how such a thing as a geek fashion show came about; it is the brainchild of Ashley Eckstein, actress and voice of Ahsoka Tano in Star Wars: The Clone Wars, who founded the women’s geek fashion company Her Universe in 2009 with The Araca Group, a leading theatrical and brand management company. By 2014, with the geeky fashion-forward merchandise company continually increasing in popularity, and seeing women constantly walking around conventions in great geek-inspired fashions, Ashley felt the next step needed to be a true haute couture geek fashion experience at the biggest comic con in the country – San Diego Comic Con.

The resulting show last year featured some truly amazing geek-inspired fashion and culminated in the audience’s and judge’s winners collaborating on a limited fashion line with Her Universe and Hot Topic, the Marvel Avengers Collection. That collection was the most successful licensed fashion collection in the history of Hot Topic, and while it sold out in a hot second (I happily managed to snag the pieces I wanted before they disappeared, and got tons of compliments while wearing the Loki and Captain America halter dresses to parties at SDCC), the high demand means it will soon be available again!

As with 2014, the winners of the 2015 show will also have the opportunity to collaborate on a line; so I was keenly interested in what we’d be seeing come down the runway (and doubly so since the audience gets to choose one of the winners!). As I settled into my seat (complete with a little “Her Universe”-emblazoned cookie surrounded by curls of delicious chocolate), I was able to peruse the provided look book, which gave the names and short biographies of the twenty-five finalists, along with the name and sketch for the look we’d be seeing. Since I knew we’d be voting, I preliminarily marked some that looked especially appealing to me; and as with any design versus reality, it was interesting to see as the show went on how some potential favorites didn’t pan out as I expected, and some I hadn’t been too impressed with wowed on the runway.

Happily, being in the front, I was able to get some good photos of each finalist’s dress (and the Her Universe clothing that was also modeled), and you can see the whole collection here. Overall, every one of the finalists was top quality, which made for a very tough choice; but particular favorites of mine live-and-in-person included Lauren Andrews’ Monster High-inspired “Party Like a Monster” which even featured doll-head heels; Harmony Leiker’s Tron Legacy-inspired “Cocktails at the End of the Line” dress with illuminated fabric; Tara Reich’s Death Star-inspired “That’s No Moon,” also featuring lit aspects, plus a fantastically appropriate purse; Daisy Evans’ Assassin’s Creed-inspired “Assassin’s Elegance,” which featured wrist blades and a cool removable skirt; Erica Williams’ Khaleesi-inspired and elegant “Rise From Fire;” Amy Scott’s convertible Rose Tyler-inspired “I am the Bad Wolf;” Leetal Platt’s Sailor Moon-inspired convertible “Usagi’s Transformation” dress; and Kelly Cercone’s Batman-inspired “Joker’s New Look” Ashley’s dresses, designed by one of last year’s winners, Andrew MacLaine, were also great.

In the end, my absolute favorite (I could so see myself wearing it to a fancy party) was the Rise From Fire dress, which didn’t end up winning; but both of the wins were definitely well-deserved. This year’s winners were Kelly Cercone, of the aforementioned Joker dress; and Leetal Platt, of the Usagi’s Transformation dress. Kelly and Leetal will now go on to design the next line for Her Universe and Hot Topic. I can’t wait to see what it is!

After the show, I was fortunate to sit down with Ashley Eckstein for a great interview about Her Universe and the show. Ashley talks about what inspired her, and what she’s seen happening in the geek fashion industry. You can watch the video here.

And if you want to see the full collection of my Comic-Con photos, you can check it out in timeline format or by section here.

So enjoy! And stay tuned, because there’s more coverage to come. In the meantime, Servo Lectio!