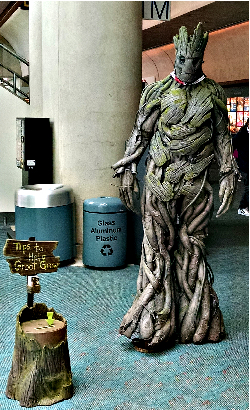 I just returned from the San Diego Comic-Con, and wow, am I beat. But that’s because there was just so much to see and do at the con – and of course, as always, I tried to see and do it all!

Sadly, there’s no way to actually experience everything (and I gave up on the FOMO some time ago), but I did manage to experience a ton of the stuff that was on offer. So much, in fact, that I think it’s going to take me about five posts to cover it all! So today, I’m sticking with the basics – the con floor and exhibits, some exclusives I scored (and coveted but missed out on!), free swag, cool cosplay, Artist Alley, and some of the stuff that goes on outside.

If you’ve been to SDCC before, you know just trying to see what you want to on the con floor and surrounding “activations” outside can be mega-challenging and exhausting. The hall is large, the activations spread out, and the crowd…well, let’s just say you aren’t going to be sprinting from booth to booth or buying any exclusives without a pretty big wait. Of course, that’s because there’s so much cool stuff to see and buy. So much, in fact, that it would take me forever to describe it, and so instead I put together this handy album of the stuff I stopped to take pictures of.

Favorite merchandise bits on the floor include this amazing Men In Black replica; upcoming collectible Marvel keychains from Monogram that will include Deadpool and X-Force Deadpool; and the Entertainment Earth booth’s many cool items, including this Boba Fett stool (there’s a whole set). Speaking of Entertainment Earth, while visiting their booth, I also got a chance to speak with Jason Lenzi, co-founder and co-owner of Bif Bang Pow!, which has partnered with Entertainment Earth to provide some cool products through their store. You can check out the interview here.

One thing any fan of miniatures, building sets, display sets, or the like really must check out is McFarlane Toys’ amazing building sets of The Walking Dead and Game of Thrones characters and scenes. They caught my eye for their small scale and detail, and after talking with the Prototype Development Director I learned that Todd McFarlane’s idea was to have the individual pieces and sets (for kids approximately 8+ to adult collectors) be able to all be put together (including the characters, which come in pieces to be put together or mixed-and-matched) into larger scenes according to preference, and to have the larger building blocks (e.g. buildings) work with other brands. The Walking Dead ones are available or becoming available now (including e.g. Daryl on the highway and the Winnebago, and the hospital doors, due out in October), and the Game of Thrones collection, Series 1, will be out in December 2015 to early 2016 (series 2, including e.g. The Wall with Jon Snow, is due out in January 2016). The amount of detail in this product is great – including things like barbed-wire-topped fences in The Walking Dead line that can be angled if, for instance, you want your walkers to be “pushing the fence down.” Everything looks to be of good quality, and doors open, wheels move, grass is flexible, and more. They have everything from blind bag minifigs to sets of 5 figures in case you want to, for instance, quickly build up your Walker army (and the blind bags are labeled W for Walkers or H for Humans so you can at least have some idea of what you’re going to get). I love it; and I also learned they have their eye on additional licenses for the future (and maybe even some Spawn stuff, like a build your own alleyway). Can’t wait to see what else they come up with.

Along with all the cool stuff to look at, I picked up some fun exclusives and swag. My absolute favorite (since I missed out on the Hasbro matchbox-sized Ant-Man, which sold out in a hot second) is the Avocados at Law tee from the Digital PIMP booth, although the Fogwell’s Gym and Agent Carter shirts from Marvel are hella sweet, too. I was also pleased with the Supernatural “Swan Song” car with army man from CineQuest.com, pretty much everything from Quantum Mechanix (lots of Firefly stuff, including a mini Serenity and Firefly playing cards complete with IOUs!), and my ridiculously large Espionage Cosmetics nail wraps purchase. In the free swag category, getting the Google Cardboard viewer was awesome, and I was also well-pleased with my exclusive Firefly poster from QMx, my Little Twin Stars fan from Sanrio, the Comic-Con Mad Libs from Penguin, and of course the Entertainment Weekly mag with Deadpool on the cover. Because Deadpool. I also swung by Dark Horse and picked up plenty to read, including Mind MGMT and Lady Killers, which I’m looking forward to.

Fun displays on the floor included LEGO Minions and a life-sized Hulkbuster Iron Man suit that I just had to pose with.

Outside in the surrounding areas, this Hand of God promotion was pretty freaky – and also pretty amusing when some of the ardent religious protesters who always appear near the convention center during Comic Con got mixed in. They were clearly confused, at first thinking they’d walked into a crowd of like-minded individuals – until they heard some of the slogans being chanted by the Ron Perlman look-alikes.

The activations included the Assassin’s Creed obstacle course, which a lot of people stopped to watch (increasing the crowd difficulty issue, but I get why they stopped – it was pretty damn cool!). Other outside stuff I was delighted to find included the Hello Kitty Cafe truck. I totally bought Hello Kitty macaroons and petit fours (tasty!).

But seeing exhibits and buying things isn’t all there is to do. There’s also a metric ton of great cosplay around, including favorites of mine like this epic Poison Ivy, this giant Groot, this somewhat Victorian female Captain America, this hilariously awesome Pikachu Deadpool, and the woman cosplaying my favorite Effie Trinket outfit. I love all the thought and work that people put into their cosplay, and how much joy they get out of it.

And of course, there’s also the entirety of Artist Alley to visit. I swung by to catch up with some favorite creators like Janet Lee, Reilly Brown, Sanford Greene, and Dustin Nguyen; and also visited Mark Wheatley‘s booth in the exhibits area. It’s always nice to take a few minutes to check out one of the main reasons SDCC even exists – i.e., the comics. And Artist Alley is a great place to do that.

Whew! I think that might just about cover the highlights of my con floor experience. Hope you enjoyed it! And fear not – there’s lots more to come. Stay tuned for coverage of convention panels, the Her Universe Fashion Show, Nerd HQ, and some of the fun party and nightlife stuff I checked out.

And until then, Servo Lectio!